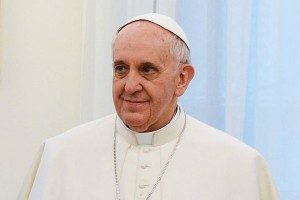 ROME — Jorge Bergoglio, also known as “Pope Francis,” asked for Mary to intercede for the oppressed on Monday and claimed to the thousands gathered to observe what is known as the Roman Catholic “Feast of the Assumption” that she had been “assumed into Heaven body and soul.”

“To the Queen of Peace, who we contemplate today in heavenly glory, I wish to entrust once again the anxieties and sufferings of the people who, in many parts of the world, are innocent victims of persistent conflict,” he said.

The Feast of the Assumption marks the Roman Catholic belief that Mary ascended into Heaven and did not suffer a physical death, although as the outlet American Catholic notes, “Scripture does not give an account of Mary’s assumption into heaven.”

The dogma was made an official Catholic doctrine by Pius XII, who wrote in 1950, “We pronounce, declare and define it to be a divinely revealed dogma that the immaculate mother of God, the ever virgin Mary, having completed the course of her earthly life, was assumed body and soul to heavenly glory.”
Bergoglio echoed this belief on Monday as he read what is known as the Magnificat and led those gathered in a recitation of the Angelus Domini.

“Mary, a humble and simple girl from a remote village in the outskirts of the empire, because she welcomed and lived the gospel, was permitted by God to stand next to the throne of the Son for all eternity,” Bergoglio stated.

However, Mike Gendron of Proclaiming the Gospel Ministries in Plano, Texas told Christian News Network that this assertion is unbiblical.

“The dogma that celebrates the assumption of Mary’s body into Heaven is closely tied to another Catholic dogma, which is, the immaculate conception of Mary,” he explained. “In 1854, Pope Pius IX declared Mary was conceived free from original sin and she remained free of every personal sin throughout her entire life (Catechism of the Catholic Church, para 491, 493).”

“After the pronouncement, some Catholics began asking a question that the church could not answer. ‘Since Mary never sinned, and sin is what causes death and the body to decay, where is Mary and what happened to her body?’ Gendron continued. “Thus the heresy that declared Mary’s sinlessness led to another heresy. In 1950, Pope Pius XII declared Mary’s body was miraculously assumed into Heaven.”

He said that Roman Catholics acknowledge that Mary’s ascension is not found in the Scriptures, but is rather only a tradition based on assumption.

“Their only basis for believing Mary’s body was miraculously assumed into Heaven is that their ‘infallible’ Church has declared it,” Gendron stated.

But, “Two thousand years ago the Pharisees nullified the word of God with their ungodly traditions and were soundly rebuked and called hypocrites by the Lord Jesus (Mark 7:6-14). Catholic bishops have made the same fatal error by rejecting and opposing God’s word,” he said.

He noted that the Bible rather states that all have sinned—including Mary, who Catholics declare to be immaculate and therefore received into Heaven bodily.

“In Romans 3:10-12, 23, we read, ‘None is righteous, no, not one…All have turned aside; together they have become worthless; no one does good, not even one … all have sinned and fall short of the glory of God.’ Mary is included in the ‘all,’ the ‘none’ and the ‘no one,’” Gendron said. “Instead of celebrating the assumption of Mary, Catholics would be wise to study the Scriptures so they can know the truth, which will set them free from religious bondage and deception (John 8:31-32).”