Euthanasia ‘tourists,’ including children, flock to Catholic-majority Belgium where assisted suicide is free and easy 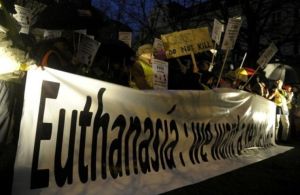 Doctors at hospitals and clinics in Brussels, the Belgian capital, are seeing an increase in number of euthanasia “tourists” who come from all over the world, mostly from neighbouring France, the International Business Times (IBT) reports.

“It’s a phenomenon that did not exist five or six years ago. Nowadays I get phone calls about French people who arrive in the emergency room announcing that they want euthanasia,” Vermylen told Belgium’s Sudpresse newspaper, The Times reports.

Belgium has the world’s most liberal law on physician-assisted suicide, which is not just for the terminally ill, according to PBS Newshour.

Patients – even children – with psychiatric conditions can request euthanasia, a hospital service that enjoys overwhelming public support as surveys have shown, PBS reports.

Many doctors say it gives patients with constant and unbearable suffering a practical and humane way to die peacefully, it adds.

What draws many of the world’s patients to Belgium is the fact that euthanasia in this country is usually free since the treatment is covered by the European Union’s health insurance card, according to IBT. The patients’ bills are simply sent to French healthcare providers.

Last year, IBT reported that 2,023 patients availed themselves of assisted suicide in Belgium, noting that the number has more than doubled in five years.

Belgium legalised euthanasia in May 2002. In 2013, the Belgium government broadened the law to include children, CBN News reports.