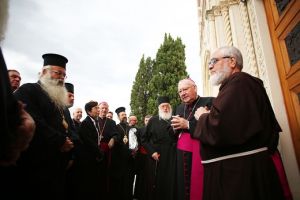 At an ecumenical gathering held this week, representatives of the Catholic and Orthodox Churches signed a joint document regarding synodality and primacy during the first millennium.

The agreement can point to ways of “resolving problems still existing between Catholics and Orthodox today,” said Msgr. Andrea Palmieri, undersecretary of the Pontifical Council for Promoting Christian Unity.

The 14th plenary session of the Joint International Commission for Theological Dialogue between the Orthodox and Catholic Churches was held in the Italian city of Chieti Sept. 15-22. Their agreement was subtitled “Towards a Common Understanding in Service to the Unity of the Church.”

The primacy of the Bishop of Rome is among the main points of disagreement between the Catholic and Eastern Orthodox Churches.

In the west, Church unity was expressed through being in communion with the Bishop of Rome, as the successor of Saint Peter. Petrine primacy among the apostles was a cornerstone in the west, whereas the east regarded Saint Peter and his successors as Bishop of Rome as “first among equals.”

The Eastern Orthodox, on the other hand, have a conciliar or synodal model of the Church. For them, unity is through the common faith and communion in the sacraments, rather than a centralized authority. They do not recognize the authority of the Bishop of Rome over all Christians, but rather consider him equal to other bishops, though with a primacy of honor.

The understanding reached this week was approved despite a disagreement regarding particular paragraphs by the Georgian Orthodox Church. When the document is published, the Georgians’ objection will be included as a footnote.

Moreover, the commission was unable to agree to a focus for the next plenary session, due to be held in two years in an Orthodox nation.

According to a statement of the Russian Orthodox Church, its Metropolitan Hilarion of Volokolamsk proposed synodality and primacy in the second millennium – with a stress on the place of the “uniate” Churches, or those which maintain Byzantine rites while having come into communion with the Bishop of Rome.

The Russian Orthodox Church says the phenomenon of Eastern Catholic Churches which broke communion with the Orthodox “still constitutes a stumbling stone in the Orthodox-Catholic relations.”
The statement noted that Metropolitan Hilarion “reminded the meeting that the Joint Commission was to discuss the issue of ecclesiological and canonical consequences of Uniatism at its plenary session in Baltimore, USA, as far back as the year 2000,” but that “the work in Baltimore was not completed because of disagreements that arose both between the Catholic and Orthodox sides of the dialogue and within each of the sides.”

The metropolitan said that the Russian Orthodox agreed to discuss synodality and primacy on the condition that within this context “the Commission will explore the canonical and ecclesiological consequences of Uniatism. However, for ten years from 2006 to 2015 the Commission has never revisited this theme.”

He maintained that having talked about primacy and synodality in the first millennium, these themes in the second millennium is the natural next step, and that “here we will have to deal with the issue of the 1054 schism and also the issue of Uniatism as one of the central ones in the second millennium. I can predict that there will be many divisive issues and that we will not agree on every point. However, the aim of our dialogue is not simply to agree on the points of which we agree anyhow, but we have to explore also the points of disagreement. And the issue of Uniatism is one such extremely burning issues.”

Metropolitan Hilarion drew attention to statements made by Major Archbishop Sviatoslav Shevchuk of Kyiv-Halych, who is head of the Ukrainian Greek Catholic Church – one of the ‘uniates’. He said the major archbishop’s statements “go against the line of our dialogue, create obstacles on its way and sow distrust between the Orthodox and the Catholics … We have to understand that there are people in our Churches who create obstacles on our way, and we have to bear it in mind when we speak about the future of our dialogue.”

The Russian Orthodox statement also said that one member of its delegation, Archimandrite Irenaeus, “stressed that it would be difficult for the Russian Orthodox Church to continue working in the Orthodox-Catholic dialogue if the problem of ecclesiological and canonical consequences of the unia remains unsolved.”