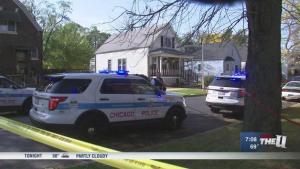 It never ceases to amaze me how accurate Christian prophecy is. Worse yet, it also boggles my mind as to how so many understanding Christians ignore it point blank. I praise God for the hedge of angels the obedient flock keeps praying for and the Lord keeps placing over them. Still, eventually that hedge will be removed when the Christians continue to ignore the many warnings as we get close to the end day by day because we cannot get around the fact that the cities of America are no place for Christians to be living. And it’s not just the crime either. That’s bad enough especially in Chicago as we see in this article. But temptation from the enemy of souls runs amuck at every turn from the scantily clad women (and men) on the billboards to the wicked souls milling about looking for a mate and or victim day by day. Yes, the city is a good place to do the work, be that secular or spiritual work for obvious reasons. But millions of people live outside the city and commute to work in them each and every day. But for Christians who understand prophecy; when it comes to the will of God who prefers His people heed the warnings, another factor of amazement has to be His off the chart longsuffering and patience towards those that remain in the city even years after realizing He told them it was time to leave.

And just so you know, I am not trying to be pushy or even tyrannical as a pastor by stating the obvious over and over again. And I am not seeking to brow beat those still in the cities be they trapped by circumstance or not. I know all too well about how difficult it can be to get out. Especially when your job insists on being there, a spouse that is not in the truth refuses to leave, or a medical issue makes it impossible sometimes. I was trapped in the city living in a very small kitchenette with my huge family for 1011 days. But that was mostly due to my bullheadedness. I didn’t know I was supposed to leave yet. But the Lord did and He made it very clear that He was not going to allow me to stay in the city no matter how hard I tried to leave. Still, I kept trying. Then one day the Lord made it crystal clear as to what His will was, and so we left. Within 6 months we found more light in Scripture that spoke of His law, the mark of the beast and other important truths that confirmed we need to get ready for His return. And that will not be easy to do in a city. Getting out of the city and away from those people and influences that crippled my vision was a necessity before having the eyes to actually see what was happening all around me and those I love. The peace of country living and the lack of the hustle and bustle allowed time to reflect and hear His voice much clearer.

While in the city I knew it was bad. I worked in the inner city for years and in Chicago’s loop as well. So I saw much crime firsthand. Before finding Christ I was one that committed many crimes and knew how enticing that lifestyle is to many living there. I lived 5 to 10 minutes from Chicago depending on traffic and the crime was off the chart. But living their my whole life made is seem like it was all the norm. But after moving to the country to live in an old farmhouse, I was able to look back while in prayer and see how very dangerous it was to live there. Especially since all my children at the time were in the public school system where the promotion of crime flourished unchecked. Yes, as I said before, we moved out because of the crime as well as what the schools started teaching about homosexuality. In fact that’s why we pulled the kids out of the schools in the first place. But a few months later when I heard about young girls were being raped a few blocks where we lived on their way home from school in broad daylight, we started looking outside the city for a safe place to live. Within 1 month we were gone. The Lord made it childishly easy to find a place to live the very second we obeyed Him.

Today, 21+ years later, it’s gotten so bad in the city now that it’s imperative to get out as soon as possible! Especially since all the signs for martial law are banging on the doors. And so I repeat; I understand it’s difficult to find a place to live in the country at times and yes finding a job can be just as hard. But if you’ve known about getting out for years and you’re still in the city today; I have to ask, are you really trying? It’s going to get very rough very quickly, and especially so if what some people and politicians believe will happen after the elections. That is if we even have one due to all the talk of suspending it to replace Hillary if she is forced out due to her many crimes. Still.. if you know you’re supposed to get out of the city I implore you to make SERIOUS plans to do so NOW! For Ezekiel 7:23 clearly says that “..the land is full of bloody crimes, and the city is full of violence.”