Trump having meetings with many foreign leaders! 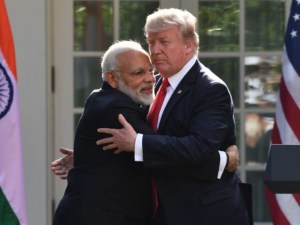 “President Donald Trump has held roughly 50% more meetings with foreign leaders than President Barack Obama did over the same amount of time in their respective first terms in office. A review of both presidencies reveals that Obama met with about 20 foreign leaders through July 6, 2009, not including international summits or the United Nations and other institutions. Trump has met with about 30 leaders through June 6, 2017 – not including summits, the UN, or the Palestinian Authority. …Trump’s ambitious foreign policy schedule contradicts critics’ attempts to portray his foreign policy as “isolationist,”  or to suggest the 45th president is not interested in foreign affairs.” –Source

For those that think Trump is against the New World Order of the Pope and globalization wherein the mark of the beast will be a sure thing to spread globally, think again. If he was against the Pope and his agenda as so many assume, he wouldn’t be doing what he’s doing right now. Not only have we seen more talk about religion in politics after Trump gained office so as to assure the prophecy regarding the religious laws needed to enforce the mark of the Roman church comes to fruition, we see Trump escalating his foreign table talks with everyone he can get a meeting with so as to speed things up. Basic reality is, if he was an isolationist as many claim he would emulate or at least lean towards the nonexistent foreign policies of North Korean leader Kim Jong-un and not John Paul II.

Seeing how he was a billionaire before gaining the office of the presidency, which means he was required to attend that Vatican CEO meeting long before running for office, and as expected things needed to get done to assure the agenda of Rome is escalated. The fact he was a billionaire with vested interests in many nations means he has a ton of political contacts in each of those nations wherein he has already made friends where it counts to assure his real estate deals get special treatment, and yes that includes tax breaks since he is bringing all sorts of jobs to each area he builds in. (is this why he never released his tax forms?) Nary a money worshipping politician is going to ignore the chance to gain financially from any big business looking to set up shop in their neck of the woods. So, getting his foot in the door is bound to be even easier for him to do than it was for Obama.

As the article outlines and even posts a list of meetings Trump has already had the last few months, he has already had 50% more meetings with foreign leaders than Obama did by the same time in office. And yes, this reminds me of another controversial political leader that when he gained office in 1978, he true broke records in political globetrotting. That’s right, directly after John Paul I was murdered for reason I suspect had to do with his disapproval of Masons in the Vatican inner garrisons. John Paul II on the other hand was a man used to wicked practices as well as a war criminal that helped the Nazi’s kill the Jews, was then elected by the prelates of Rome to go forth and make allies with as many nations as possible before he was old enough to die off. This is why both John Paul I & II were unusually young when elected. The Jesuit general, or “black Pope” as most know him by, was very aware of his dying god’s time running out and so they needed both a charismatic as well as a very young and energetic Pope to be able to go forth for more than the usual few years the older Popes had to do their work.

Basic reality here is when John Paul II gained office the Vatican had very few ambassadors and friends in foreign nations due to their well-publicized evil pastand not so distant past for that matter. But by the time he died (murdered?) they had 175 nations in their hip pocket making them the most powerful political nation on the planet. And now we see Trump doing what he can to assure every one of the leaders that are connected with Rome also stand ready to play their part in the that next step towards the long prophesied New World Order. In other words, the Ten Toes the prophet Daniel spoke of are about to slip into their not so agreeable sandals.

As students of prophecy we know what’s next. As also prophesied our numbers are very small. But, just as we saw David run towards Goliath when the time was right, we too will be ready to do as prophecy says the remnant people will do. The Pope, Trump and everyone else working for Satan are speeding things up out of sheer fear. They will do all they can to try and prevent what we are prophesied to do. But not to worry brothers and sisters, as always, the prophecy of a living God will most assuredly be fulfilled! The fact they are doing exactly as His written Word said they will do has been confirmed before the eyes of billions the last few decades alone. MARANATHA!