Christian slapped with $12,000 ‘Shariah fine’ for not removing shoes 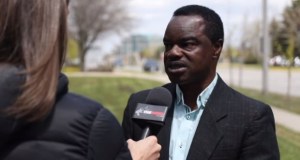 His crime? Religious discrimination, according to the tribunal.

The tenants were planning to move out of his rental home, and he says he gave the couple the required 24-hours notice that he would be showing the apartment to another tenant.

They told him not to come while they were praying, and to text first. He agreed. But when they stopped answering his text messages, he showed the apartment.

The Muslim tenants waited eight months before filing their grievance with the human rights tribunal, where they receive free representation, the Toronto Sun reported. The couple even searched his Facebook page and found a joke they considered offensive and used to bolster their case. The tribunal agreed he harassed them and failed in his duty to accommodate their religious needs – and awarded them $6,000 each – plus interest.

Alabi says he does not have the money to pay the fine and doesn’t know what he’s going to do.

Faith Goldy, a reporter for Rebel News Service, is crowdfunding support for Alabi and recently aired an interview with him.

“I don’t have the money. I work very hard. If they go into my bank account right now, I don’t have $12,000 there,” says Alabi, who lost thousands of dollars in legal fees and time off work.

While it sounds extreme that a government agency would order a citizen to pay money to a Muslim for offending the Muslim faith, the U.S. is rife with examples of progressives attempting to implement similar restrictions upon non-Muslims, says Pamela Geller, an author and anti-Shariah activist.

“We are already traveling down that path. The foremost indication of this is in the general acceptance of Islamic free-speech restrictions,” Geller told WND.

“When I organized a free-speech event in Garland, Texas, my goal was to defend the principle of free speech in the face of violent intimidation,” Geller said. “Yet even after jihadists attacked our event, I was blamed by the establishment media and many conservatives for provoking Muslims.”

And that was more than three years ago. If Geller tried to hold a draw-Muhammad contest now, it would be impossible to pull it off anywhere in the United States, she said.

“No arena in the country would allow me to do so – not just because of the security risk, but because of the vilification that would come from the establishment media,” Geller said. “Under what law is it wrong to depict Muhammad? Under Islamic law. But I am not a Muslim, and I do not live under the Shariah. Yet Shariah is advancing in the U.S. right under our noses, with the help of the political and media elites.”

Robert Spencer, who works with Geller on various projects and is editor of the Jihad Watch blog, said Canada has been all but “conquered” by Islam, which is seen as a protected class by its enablers on the left. And the U.S. is not far behind in the race to establish Islam as the dominant religion in the its culture, thanks to political correctness that seeks to destroy anyone who speaks a negative word about Islam. No other religion enjoys such favor from the U.S. media establishment.

“Criticizing Islam in any way will already get you stigmatized as a bigot and a hatemonger,” Spencer said.

The city of Minneapolis recently implemented a hate crimes hot line for residents to call in and report their employers, police, friend or family members they suspect of anti-Muslim “bias” whether in word or deed. The cities of San Francisco and Nashville have similar snitch lines encouraging people to report fellow residents and accuse them of being anti-Muslim.

On Friday the Southern Poverty Law Center, whose followers include such radicals as James Hodgkinson, who attempted to assassinate Rep. Steve Scalise and a dozen other Republican congressmen last month, reiterated its claim that Spencer is an “anti-Muslim extremist.”  The SPLC’s only evidence for smearing Spencer’s character was that he said Islam is “not a religion of peace.”

“Newspapers all over the country refused to print the Muhammad cartoons and stand for the freedom of speech; instead, they pontificated about ‘respect’ for Muslims,’” Spencer said. “We are well on the way to accepting Sharia blasphemy laws. And once that submission is complete, submission to the rest of Sharia will follow.”

As for Alabi, he came to Canada 22 years ago from Nigeria.
“Since then, he’s followed Canadian laws and worked hard; he carries not one but two jobs today, just to ensure his family is cared for,” writes Goldy. “John’s a man with the sort of story every Canadian should be proud of. But instead, he’s being labelled a human rights violator.”

Ralph Sidway, a Christian writer who commented on the story for his Facing Islam blog, noted that Canada is now blatantly implementing Shariah blasphemy laws, trying to force a Christian man to pay a punitive tax to his former Muslim tenants.

“Canada is in essence behaving like a conquered, dhimmi state, extracting jizya from its citizens to appease its Islamic masters, who rank highest in the Canadian Human Rights hierarchy,” he wrote.