Preschool teachers cause children to be heterosexual 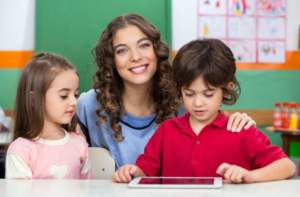 Why not suggest you can play house with two moms?

A recent research paper suggests that preschool teachers are the reason most people identify as heterosexual.

“Reproducing (and Disrupting) Heteronormativity: Gendered Sexual Socialization in Preschool Classrooms,” published last month in the journal Sociology of Education, is based a sociology researcher’s observations of nine different preschool classrooms over the course of 10 months.

Heidi Gansen, a University of Michigan doctoral student whose research interests include gender and sexuality and childhood, concludes that preschool teachers are both constructing and disrupting gendered sexuality in multiple ways.

“[H]eteronormativity permeates” these classrooms to such an extent that preschoolers learn “that boys have gendered power over girls’ bodies,” Gansen writes in the abstract.

The paper was publicized by the Twitter account New Real Peer Review, which highlights peer-reviewed research papers it considers outlandish. 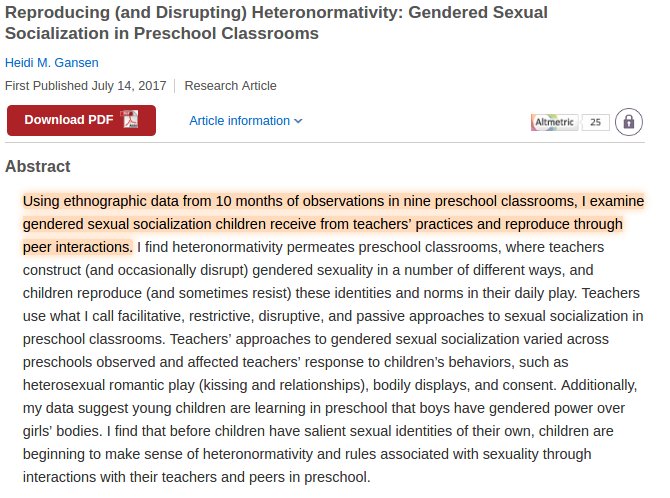 Gender scholar discovers kindergarten teachers are the reason most people are heterosexual..

Why aren’t you telling boys to marry each other?

Gansen studied three Michigan schools whose early childhood programs demonstrate quality in “almost all” categories measured by the state’s Great Start to Quality system. The groups she researched spanned across white and nonwhite children from middle to lower class.

In one preschool with relatively inexperienced teachers – one to three years – Gansen found they took more facilitative approaches, encouraging two-year-old children to have crushes, boyfriends and girlfriends, and even kiss one another. One asked a girl if she wanted a kiss from a boy the teacher thought liked her, even though the boy “was unable to ask and did not articulate the request to kiss Alexis on his own.”

The teachers at that preschool would also encourage relationships onto children who seemed to play together, Gansen said.

from the abstract, this looks like a reasonable and accurate paper

They often asked girls where their “husband” was, with one set of teachers even chatting amongst themselves about how a particular boy and girl in their class would be “the spaciest couple ever” if they got married. One teacher who was about to get married told a girl who wore a dress to class one day that she was “practicing” for her own wedding.

The study cited multiple incidents that seemed to stunt children from fully exploring gender roles, according to Gansen, most prominently when the children played house. The girls in the class would often get into arguments about who could play the role of “mom,” which resulted in the teachers intervening.

While this may seem normal to a lay person, Gansen specifies that not once did the teachers in two of the three observed schools suggest that it was appropriate for the girls to play the dad, or even have a household with two moms. This was despite a child in one of the classrooms having lesbian parents, she wrote.

For some strange reason girls prefer to play mom 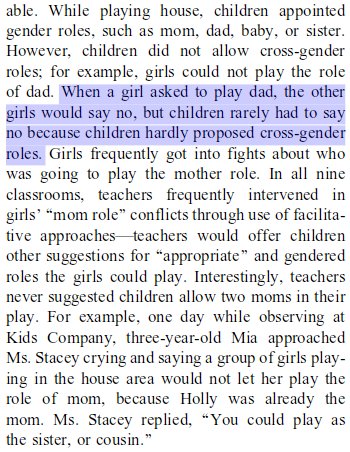 The gender scholar also found it notable that teachers in all three schools policed the girls when they exposed their bodies but ignored or failed to reprimand boys when they did the same “sexualized behaviors.”

Gansen’s website says she received an “outstanding graduate student” award from the American Sociological Association for her paper, which was taken from her dissertation.

She did not respond to multiple requests for comment via phone and email in late July and again Tuesday.

Gansen’s references from her curriculum vitae – University of Michigan sociology professors Fatma Gocek, Elizabeth Armstrong and Karin Martin, her dissertation committee chair – did not respond to requests, either.

Early-childhood scholar Erika Christakis, the former Yale professor who criticized an administrator’s email to students about offensive Halloween costumes, did not respond to phone and email requests for comment about Gansen’s paper.

Lack of any scientific evidence? Shared environment (which includes preschool) show little to no effect on adult behavior and sexuality