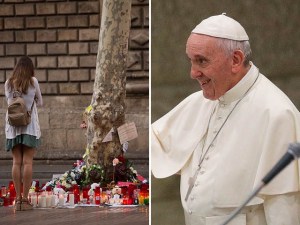 In other words, like any radically disconnected from reality politician no matter what side of the isle they herald from, the Pope ignores the plight of the innocent people that are openly being persecuted, raped, beaten, tortured and even killed en masse by these so called “immigrants” simply because he wants to make sure his loyal soldiers in Islam find their selected post of duty in every nation on earth so as to help Rome do as prophecy says they will do when it comes to enforcing their admitted mark. And as prophecy predicted and historic record confirmed, like his dying god Satan, (see proof here) he uses fear as a major cog in his wheel of deception because it’s so much easier to force someone to do as you command than it is to ask them to bow in worship, even though all politicians have already done so on camera.

Thanks to Rome’s power to deceive by force, people are literally dying out there both spiritually and physically and all the Pope is concerned with is his agenda to have his henchmen in every nation on earth. He literally demands all nations allow the rapist and killers into their countries to assure (as prophesied) that his office gains global stature as THE moral authority on earth. But when was the last time a Muslim has been offered citizenship in Vatican city? Never as far as I can see. In fact, have you seen the huge wall the Pope has around his land? That was put there to keep Muslims out during their crusades! (Click here for a perspective as to high tall that wall is!)

On my Pope and Islam page I outline not only the similarities between Islam and Roman Catholicism right down to their theological agreement on Marian worship, I also show how Rome is using the Islamic soldiers to pump up the long prophesied fear of mankind to keep them in an irrational state of mind so as to have the control they need. (See Luke 21:26)

Now just so you know, I see no Bible passage declaring verbatim Muslims will man the guillotines, but that doesn’t mean what the Lord reveals to students of prophecy regarding prophesied events is lacking. We know how to find light because obedience to His Word allows for a better view of the path we tread. We all know about Revelation 20:4 and how many that refuse the mark of the beast in Rome will be beheaded for their faith in Jesus Christ, and we know all too well about Islam’s favorite method of killing Christians is by beheading them, and we also know how Rome is using the Muslim men to kill Christians and Jews today in the exact same way they used Hitler to kill Christians and Jews not too long ago. Compile that with the documented historic proof that the Vatican wrote the Koran so as to create a race of religiously motivated bloodthirsty killers is absolute when it comes to how Rome has always worked with their pawns in the past.

After their mortal wound was administered by Napoleon in 1798AD as prophecy so clearly predicted, they knew after that date that they could no longer openly kill people that refused to bow to their power as they did to the tune of hundreds of millions during the Inquisition because without the power of the body politic behind them, they would risk destruction of the church as well. And so after 1929 when the scab started to form over that wound and that documented signed in the Later Palace gave them back their political power while still claiming to be a church, they began killing again. But this time they used others to do their killing for them so as to pull the onus off of them granting them the ability to play the moral card by making the Pope appear as a holy man innocent of any of the evil deeds he was actually doing all along.

Now that the wound is finally healed, (see video proof here) the Pope knows he can make crazy claims like this before all the world knowing no one can stop him because with the healing of the wound comes the fact that every political power on earth has declared loyalty to the Pope. Hence the reason talk of a New World Order has increased. The prophesied ten toes of Daniel are right now slipping into their Vatican approved sandals to stand as one with the Pope. But as also prophesied, they will only be able to do so for a very short time. Not long after they do that will the eastern sky split wide open to finally put an end to the great controversy between Christ and His angels and Satan and his angels. (If you click that last link, give it time to load. It’s one huge PDF file)

And for those skeptics out there that think the migrants are merely men, women and children running for their lives from war torn nations seeking refuge in peaceful nations; explain the pic on the right here.

(click to enlarge) If they were really migrants fleeing war torn regions of the world, where I ask are all the women, children and old people in this or any picture showing them gathered in large numbers? If they were really fleeing dangerous areas, why on earth did they leave their precious wives, children and parents in those dangerous areas to die?! It’s simply, these men are not migrants! These are young men, or should I say young Vatican soldiers that are ready to do as prophecy stated Rome will do when it comes time to drop the other shoe.

And as for those that think Islam is THE Antichrist or think the king of the North is Islam, I am sure your forefathers also thought Hitler was the Antichrist and Islam was that king. Biblical fact remains that both Hitler and Islam can’t possibly be the Antichrist. Reason being is, 100% of the prophecies must match THE Antichrist. Not 20%, not 50%, not 90%, or even 99.9%. 100% must match to the letter or it simply is not of God. You cannot cherry pick a few prophecies to make the argument that benefits the lie of the dying god of Rome who’s main agenda is to hide the truth about his man of sin in the Vatican. God is not one to be mocked and therefore His prophecy is in no way shape or form able to be manipulated or doctored in any way. In short, if you believe the Bible is penned by a God that cannot lie, then your banner held high must be that God said it, you believe it, and that settles it!