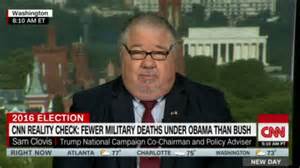 President Trump’s nominee for the top science position at the U.S. Department of Agriculture (USDA) has argued that the legalization of same-sex marriage could lead to legalized pedophilia, CNN’s KFile reported on Monday.

Sam Clovis made the comments on his conservative radio show and in an op-ed in a conservative blog in separate incidents ranging from 2011 to 2015, according to the news network’s investigative unit.

“If we protect LGBT behavior, what other behaviors are we going to protect? Are we going to protect pedophilia?” he asked in a video uncovered by the CNN team. “We’re not thinking the consequences of these decisions through.”
When told his opinions were “extreme,” Clovis said that he believes they are “logical.”

“I think it’s a logical extension of thought. And if you cannot follow the logic, then you’re denying you’re in denial.”

Questioned by CNN about Clovis’s comments, a USDA spokeswoman referred to the 2015 Supreme Court decision legalizing gay marriage in all 50 states.

“The Supreme Court settled the issue in 2015,” the spokeswoman said.

CNN also found that Clovis repeatedly argued that being a member of the LGBT population is a “choice.”