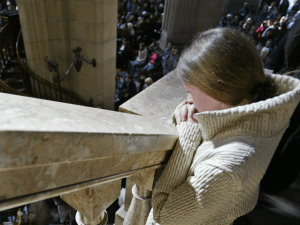 This is why the Protestant movement and even the name “Christian” has become so weakened over the last few centuries to where very few prayers are answered. No one is serious about their Christian walk! And to call Roman Catholics Christians not only makes Muslims hate us, (because it was the Vatican that attacked them in the Crusades and NOT Christians) it also makes Christians look bad when those that deny Scripture to worship idols declare themselves to be followers of Jesus Christ. I do not apologize for that statement because there is simply no easy way to say that. Sometimes truth is simply that blunt.

The rosary, which can be exposed easily as I have done on “the Rosary” page on my website, is in fact a confirmed Pagan prayer ritual that both Muslims and Buddhists have been known to use. And yes, Pagans, witches and even Satanists use beaded prayer chains as well. All the rosary is is a collection of repetitive prayers to a dead human being that make the creature (in the case Mary) more worthy of worship in the heart of the Catholic than the Creator of that creature. Worse yet, this type of prayer is specifically warned against by Jesus Christ Himself in Matthew 6:7 when He said, “But when ye pray, use not vain repetitions, as the heathen do: for they think that they shall be heard for their much speaking.”

The Mary of Rome is a Catholic twist on the Pagan goddess affectionately titled “the Queen of Heaven.” I expose this demon goddess in detail on my “Queen of Heaven page” for those of you that my need some additional info in helping a Catholic to the truth. By no means the humble obedient Mary of the Bible who is forever blessed for her obedience is the same Mary of the Roman Catholic church. Rome declares her “sinless” yet Mary admits she was a sinner when she stated in Luke 1:47, “And my spirit hath rejoiced in God my Saviour.” If she was sinless, why would she need a Saviour?

For those that want even more info exposing the demon calling itself Mary, I have another page on my main website dedicated to that fact alone. On my “That’s NOT Mary” page I show how that which this so called “Mary” says in the many Vatican approved apparitions is nothing more than a demon spewing doctrines straight from hell as well as uplifting traditions of man that if embraced will guarantee the recipient everything from extra time off in Purgatory (another Pagan doctrine) to absolution of sins confessed to a Roman Catholic priest.

These demons claiming to be Mary are very crafty indeed. But not crafty enough wherein even a babe in Christ can expose with childlike ease. What I mean is, take for example a statement the demon claiming to be Mary stated in 1917. It said, and I quote, “Only I can help you. My Immaculate Heart will be your refuge and the way that will lead you to God.” That statement is blasphemous! John 14:6 clearly records that “Jesus saith unto him, I am the way, the truth, and the life: no man cometh unto the Father, but by me.” That’s right! It’s THAT EASY to expose these demons! That’s why I said even a babe in Christ can expose them because one thing about real Christians is that they actually read their Bibles.

But that’s not the worst of it. Even though the Catholic church has admitted in writing more than a few times that the majority of their dogma (86% in fact) is in fact Pagan in origin, they call themselves Christians anyway. And worse yet, so called Protestant Christians who have joined in the ecumenical group hug with the Vatican, (as prophesied) they also declare Roman Catholics to be Christians with their own lips. But Jesus Christ Himself stated in Matthew 15:7-9, “Ye hypocrites, well did Esaias prophesy of you, saying,  This people draweth nigh unto me with their mouth, and honoureth me with their lips; but their heart is far from me.  But in vain they do worship me, teaching for doctrines the commandments of men.”

As for this rosary defeating Islam? Not by a long shot! The Popes of Rome have openly denied the Christian God more than a few times over the centuries, Islam was not only undefeated by them, it has become one with Rome to kill real Christians even to this day. And so such prayers as these recited via the rosary are never heard for it is also written in Isaiah 1:15, “And when ye spread forth your hands, I will hide mine eyes from you: yea, when ye make many prayers, I will not hear: your hands are full of blood.”

Getting hundreds of millions of people who seek to declare themselves followers of the Christian God confused by these Pagan priests into praying to a dead human other than the Creator of the humans; and then further confused to actually recite prayers over and over again to this Pagan goddess claiming to be the Queen of Heaven is something that actually angers the Lord they seek to worship. Notice what it says in Jeremiah 7:18-19, “The children gather wood, and the fathers kindle the fire, and the women knead their dough, to make cakes to the queen of heaven, and to pour out drink offerings unto other gods, that they may provoke me to anger. Do they provoke me to anger? saith the LORD: do they not provoke themselves to the confusion of their own faces?”

Yes, the Bible exposes the Vatican dogma that easily and that is why the Popes keep declaring the Bible is “a dead and speechless book” or a “poisoner of souls” in their many documented statements because they know the Bible does in fact hold all the truth and it easily exposes them as Antichrist and so they will most assuredly attack the Bible to prevent their people from leaving the pews. And so this is why they declare Sola Scriptura (the Bible alone) to be a problem for them.

And so yes, this is why Catholics are so doctrinally confused to this day. They have no clue as to who they are supposed to believe anymore. Do they believe the Lord, the priest, the Pope, a demon calling itself Mary, a patron saith demanding they flog themselves bloody during Lent or another patron saint demanding they crucify themselves on the Pagan festival of Easter? And when it comes to the Holy Spirit inspired Bible they claim Sola Scriptura is a lie because their leaders told them so. But if they, like myself who was once Catholic 33+ years ago, finally open their Bibles one day, they too will see the light of truth and “come out” of the graphically described and prophesied Whore of Babylon. And please; before you email me claiming I used an insulting term, I implore you to read your Bibles; and specifically Revelation 17. How on earth can it be considered an insult to declare the Roman Catholic church to be the Whore of Babylon when the Lord Jesus Christ was the first one to declare it as such in His prophetic Word?

Please pray for the Catholic people. They, like everyone else have very little time to repent.