Is Jesus really your KING? 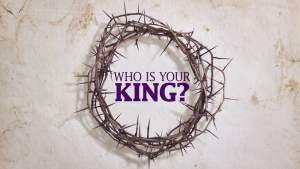 As is obvious, there are quite a few laws and regulations for the people living in the United States, and every American is expected to abide by each and every one of them. And yes, many of the laws and all of the regulations cost the American people money. In fact, it was recently estimated that the annual cost for federal regulations (again – not counting State and local) is at $1,88 trillion! That’s 11% of the US GDP! I didn’t even bother to look up what it would cost if you broke any of those laws which we all know is always many times more expensive to break them than it is to keep them. Yet every law abiding American pays them without question and abides by the laws of the land each and every day knowing that in so doing causes most of them to experience a financial burden for them and their families.

Why did I share all that? It’s because most people will pay the fees and abide by literally tens of thousands of rules and regulations without question even when it takes food off their tables; yet when it comes to the laws of the land in New Jerusalem wherein there are not tens of thousands of laws, but only 10 Commandments the kingdom of Jesus Christ. But most Christians have a hard time keeping them and especially the 4th Commandment regarding the Sabbath and get this, 1 John 5:3 even says “his commandments are not grievous” which means none of us experience a burden for keeping His law. In fact keeping them blesses us and our families in amazing ways. And so I have to ask Mr and Mrs Christian this question. Is Jesus really your King? Or are you saying by your actions that mankind is your king? Seriously… think about that for moment.

If you keep every law in your nation as is your Christian duty to do so, yet knowing that in so doing causes you financial burden, but at the same time you refuse to keep the law of your God wherein He declares in Ecclesiastes 12:13 that “this is the whole duty of man”, then you are proclaiming to be one of those described in Romans 1:25, “Who changed the truth of God into a lie, and worshipped and served the creature more than the Creator, who is blessed for ever. Amen.”