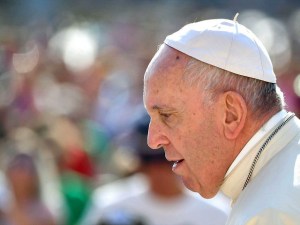 It’s bad enough this Pope and all previous Popes have defended these child molestations for literally all of what they claim are religious lives; but to claim the victims were lying just to get the priest that molested them in trouble, is downright demonic.

As the article also stated, even though then Cardinal Bergolio aka Pope Francis commissioned a 2600 page report slamming the victims to try and help a child molester escape jail, the court didn’t fall for it and the priest was convicted and sentenced to 15 years in prison.

What most fail to realize is, as I posted in a video years ago when the Pope was elected, as Cardinal he made it possible for homosexual to have legal civil unions in Argentina. This is why he defends these child molesters to this day.

What’s really shameful today is, when he was approached not too long ago about his involvement in the current molestation scandal he declared boldly he was not going to say one word. But then when he finally did decide to speak on it, he again chose to defend the child molesters by slamming the priests in his own Vatican that outed them.

The man of sin is most assuredly exposed even in the eyes of most Catholics now. And it is just as the prophet Daniel stated long ago. When speaking of the Popes in Rome he said in Daniel 11:37 that, “Neither shall he regard the God of his fathers, nor the desire of women, nor regard any god: for he shall magnify himself above all.”

In this one prophecy alone we see three main fruits of the Popes of Rome are as follows. Number one, they have recently been exposed as Devil worshippers which means they do not worship the God of their fathers. Number 2, 98% of the Vatican prelates are homosexualwhich plainly means they have no desire for women, and finally number 3, all Popes have declared themselves God on earth thereby magnifying themselves above the God of the Bible. Christian prophecy is THAT accurate!