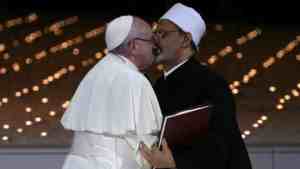 Yes, students of prophecy have known about this One World church for decades now. In fact I had a Newsletter on this back in July of 2000 when they finally made the one world church official with the Pope at the head of it. And so we knew this was to be expected. But, when I look back at all the steps it took to get the Pope and the leader of the Islamic faith kissing on camera, those that know how to connect the dots can do so regarding why the Vatican is doing all it can to make the church look good in the media by reporting things like Pope Francis Admitting Nuns Were Used as “Sex Slaves” by Priests and Bishops. He did this to set the stage for what’s coming NEXT!

As Bible believers we have seen every step taken by the Popes of Rome that matched perfectly with Christian prophecy so as to assure that in the United States, free speech will be removed. And this is especially true when it comes to religious speech. And so it’s no mistake that the New Jersey Islamic leaders stated that all Muslims should reject freedom of speech, freedom of religion and freedom of the press a few days ago. You don’t make bold statements like that without first getting the ok from the head of the Islamic faith. That kiss between the Pope and Sheikh Ahmed al-Tayeb confirms the stage has been set and they will now go forward on this.

As I stated in many videos, radio broadcasts, Newsletters and blog entries over the years; the Pope’s plan for Roman Catholicism to be the law of the land in every nation on earth is a prophetic fact and that is why I have been posting what I came across on the following pages for many years now. And what I am about to share for those of you watching the video instead of reading the blog is all linked out in this blog entry.

And just so you know, there is just too much to try and cover in this blog entry and so please check out the articles and videos on the following pages when you get time. See my Religious laws are coming page wherein you will see all the expected steps taken since the 2016 election alone. Next see my Pope and Islam page that covers decades of activities between the Pope and Islam to get him to where he is today. Then there’s my page wherein I prove the Popes of Rome wrote the Koran. Also see my Rome’s WAR against Free Speech page of just the last few years alone. This page will literally shock some of you. Next see my Salute of Rome page where I share pictures of Hitler’s troops and Muslims saluting the Pope on camera. (I made a video of this page and YouTube BANNED IT in many nations.) Then check out another page wherein I show the Real Power behind the New World Order. My King of the North page was mainly created to expose the many false prophets claiming that king to be Turkey and not the Pope by refusing to show certain Bible verses to their followers. And then see my Newsletters, and especially those titled One World Court System in Rome, Global Universal Power of the Pope, One World Church Officially Started, The Rome Statute of the International Criminal Court,Speaking against Vatican = Danger, Universal (Catholic) Control, Guillotines in America, Church & State can Cooperate?, Pope wants control of the Global Economy, Vatican seeks Global Supremacy, The Vatican, Islam & Hitler, Rome’s Ecumenical Queen, Cultivating Papal Worship, Pope Playing the Muslim Leaders, Open Borders keep Vatican afloat, United Religions Based in Rome newsletter, the Vatican’s fourth Reich and finally a newsletter titled Vatican a “Huge moral Authority.”

That last Newsletter from ten years ago is why the Vatican has been outing itself so much the last few years and especially now that the stage is set. Like the prophesied fake apology of John Paul II, their deceptive actions make the easily confused political leaders believe they are no longer out for blood when in fact they are and have been all along. This beast will never change – but it will die soon.

Now I have literally thousands of pages and newsletters and hundreds of videos to share that also touch on the one world religion plans of the Pope on many levels. And I hope some of you that want to know what time it is check out as many as you can on my main site so as to realize it was all prophesied. Hopefully this will bring some to repentance so as to be ready for the coming of the Lord. The Popes of Rome have slowly but surely brought all the apostate churches into one camp so as to get this done. And yes, this includes the SDA church wherein we have many confirmed SDA doc files proving they are not only helping the Pope’s prophesied agenda, as my recent videos prove, were you aware that some of the tithe money they collect is actually sent to the Pope as a show of good faith?

As prophesied every false religion on earth must gather as a one world religion under the man of sin in Rome so as to be used by Satan to come against the obedient remnant people in the hopes of forcing them to receive the mark along with everyone else. And they will do this from the courts to the pulpits and this is why the Pope not only calls Muslims that kill Christians daily his brothers in the faith. And yes this is why all denominations including the SDA church declare the god of the Muslims is the same as the God of the Christian.

When the Pope walked into that ceremony holding that Sheik’s hand and then kissing him on camera, he did this to bolster their long prophesied stance against God’s people to try and make them fearful that all the world is gathered against them. But what they fail to realize is that our “God hath not given us the spirit of fear; but of power, and of love, and of a sound mind.” – 2 Timothy 1:7

As prophesied, “Great changes are soon to take place in our world, and the final movements will be rapid ones.”–Testimonies, vol. 9, p. 11.

Are you ready? ARE YOU SURE?

Additional Articles Confirming we are in the Last Days:
VIDEO: ‘Climate Change Denier’ Marc Morano Pushes Back on Global Warming Hysteria * Up to 500,000 drought-stressed cattle killed in Queensland floods * One World Religion: Pope Francis Signs Historic Covenant With Islam * GLOBAL WARMING? Near record snowfall in Hawaii * ‘Andi Mack’ Marks First Disney Channel Character to Say ‘I’m Gay’ * GLOBAL WARMING? Farmers: Winter Storms Killed 1,600 Dairy Cows in Washington State * Report: China Silencing Chinese Criticizing Socialism in Venezuela on Social Media * WHAT?! In the USA?! VIDEO: Beto Supporters Use Bat to Beat Hanging Trump Effigy * Amazon No. 1 – for sexual exploitation of kids * LOL WHAT?! It’s not a boy or girl. It’s a ‘theyby’ * WOW! VIDEO: In your face! Police use snake to get confession * VIDEO: Chicago Is The Most Corrupt American City: Report * FYI: Your Smart Light Can Tell Amazon and Google When You Go to Bed * FYI:Woman dies months after doctors reportedly removed both of her healthy kidneys by mistake