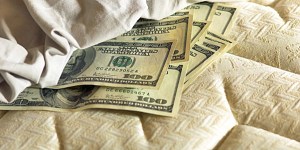 “In the name of fighting terrorism financing, a new U.S. Senate bill threatens to force private corporations to monitor your financial activity and empowers government to seize all your assets if you fail to comply with the new law. Even failure to fill out one form is license for the federal government to take everything you have. …If the bill becomes law, Americans would be subject to a whole host of government intrusions. One little slip-up would open a Pandora’s box of governmental inquiry into your financial life,” says Peter Reagan, a financial-market strategist at Birch Gold Group. “For example, failing to complete a single reporting form would result in the government being granted abilities to freeze and seize not just a portion, but the entirety, of your assets. The bill even goes so far as to include the contents of safety-deposit boxes.”-Source

Looks like Satan is getting a little worried and hurried in his final agenda because he knows that if the people have access to cash they can avoid the mark of his beast that his man of sin in Rome is about to enforce. As one of many students of prophecy, this is why I created a page titled “the expected cashless society” on the site many years ago about the Pope’s plan to make sure all cash is removed from society or at the very least digitized so as to control every dime.   END_OF_DOCUMENT_TOKEN_TO_BE_REPLACED