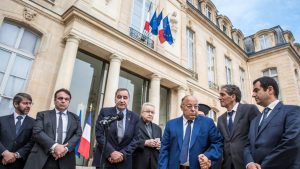 French religious leaders have called for more security at places of worship following the murder of an elderly priest in Normandy on Tuesday.

On Wednesday evening Mr Hollande went on to attend a mass for the priest in Paris’s Notre Dame Cathedral.

Fr Jacques Hamel died while conducting a service in his church in Saint-Etienne-du-Rouvray, a suburb of Rouen.

The killing came 12 days after the attack in Nice in which 84 people died.

Only one of the two attackers has been named. Adel Kermiche, 19, had twice tried to reach Syria to fight with the self-styled Islamic State group (IS).

Muslim leader Dalil Boubakeur, rector of Paris’s Grand Mosque, said the leaders “deeply desire that our places of worship are the subject of greater [security] focus, a sustained focus”, as even “the most humble place of worship” can be subject to an attack.

Mr Boubakeur expressed “profound sorrow” on behalf of French Muslims at the attack, which he described as a “blasphemous sacrilege”.

The Archbishop of Paris, Andre Vingt-Trois, praised the harmonious relations between France’s religions.

“We must not let ourselves get pulled in to Daesh’s political games,” he said, using a pejorative term for IS, saying it wanted “to set children of the same family against each other”.

President Francois Hollande has also been chairing meetings of his security and defence council and his cabinet.