Pope Francis: Capitalism Is ‘Terrorism Against All of Humanity’ 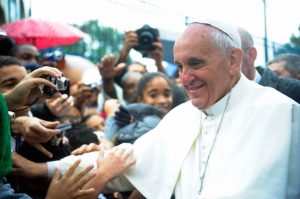 “The remarks followed similar comments made Wednesday, when Pope Francis argued that the current Middle East conflicts are wars over economic and political interests—not religion or so-called “Islamic terrorism.” “There is war for money,” he said Wednesday, according to The Wall Street Journal. “There is war for natural resources. There is war for the domination of peoples. Some might think I am speaking of religious war. No. All religions want peace; it is other people who want war.” –Source

Either the Pope has a spiritually lethal mental defect making it impossible for him to see the truth on Islam, or as I and many other students of prophecy have been saying for decades, the Popes of Rome have one agenda and one agenda only. Uplift Satan, his agenda to destroy as many lives as possible and since the work is nearly done wherein most people trust the lies over the truth staring them in the face, the Pope’s of Rome will gleefully spout as many lies as possible so as to push forth the lie that Islam is a peaceful religion so as to push the other lie that Sunday is the Sabbath and all must bow to Satan so as to have the peace they are craving in their countries.

Yes, it is true that some poor people will choose crime as a way to pay the bills and fill their stomachs. But for the Pope to claim the terrorists of Islam are doing it for the money and not for the Vatican contrived dogma found in the Koran that demands hey must kill any and all that refuse to bow to the false god “Allah” is laughable at best. With every single killing be it the individual or en masse we here the deluded Muslim declare “Allah Akbar” which roughly translated means “Allah is greater.” I assume they mean greater than the Christian God because more than a few Iman have declared on camera recently that the word “Allah” cannot be used by Christians much to the dismay of the Pope and his many false teachers inside the SDA and other churches claiming Allah is the Christian God. The fact they started shouting Allah Akbar first when killing Christians also exposes the Pope. But then, it’s not like he’s hard to expose the Popes that have been exposed first in Christian prophecy eons ago.

Those unfortunate souls that have bought into the Vatican contrived “72 virgin” lie are not blowing themselves and others up for the money or even creature comforts as this Pope claims here. They praise their false and quickly dying god with every killing! And  yes, he is dying. The fact their religion is all about death speaks volumes to the soon coming demise of their false god. The Pope is nothing more than a pawn of Satan who will spout any lie he can that will uplift Islam and promote Socialism as the end all fix all. If the Muslims were killing 165,000 people each year for the money they lack as the Pope claims, then why do they only chose to kill poor unarmed Christians and not the wealthy people all around them so as to gain what Capitalism supposedly took away from them? It’s that easy to see the lie, yes. But we as obedient Christians have eyes that see the truth as it is. But the Pope knows our numbers are small and everyone today can see that most people on earth do believe the lies of the Pope because as was also prophesied, all the world truly does wonder after this beast in Rome.