As a follower of Jesus it is your duty to vote, says US Episcopal Church leader 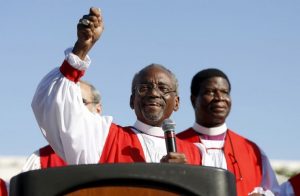 America heads to the polls on 8 November. The church has launched an “election pledge” as part of its campaign to persuade all citizens to use their vote.

Curry says: “We are blessed. We are blessed as a nation to be able to do so as citizens of this country. This is a right, an obligation, and a duty.”

The privilege to be able to vote was won through an American revolution, he notes, and furthered through civil rights and women’s suffrage.

“So I encourage you to please go and vote. Vote your conscience. Vote your perspective. But vote.”

He says voting is a Christian obligation.

Citing Romans 13, where Paul outlines the duty to engage with the process of government, he says: “Indeed, we who follow in the Way of Jesus of Nazareth are summoned to participate actively as reflections of our faith in the civil process.”

St Paul says: “Pay to all them that is due them. Taxes to whom taxes are due. Revenue to whom revenue is due. Respect to whom respect is due. Honor to whom honor is due.”

Curry says: “For St. Paul, the way of love, the love of neighbor, is the fulfilling not only of the moral law of God, but the way to fulfill the civil law. Go and vote. Vote your conscience. Your conscience informed by what it means to love your neighbor. To participate in the process of seeking the common good. To participate in the process of making this a better world. However you vote, go and vote. And do that as a follower of Jesus.”

[Commentary:  “The Lord would have His people bury political questions. On these themes silence is eloquence. Christ calls upon His followers to come into unity on the pure gospel principles which are plainly revealed in the word of God. We cannot with safety vote for political parties; for we do not know whom we are voting for. We cannot with safety take part in any political scheme. We cannot labor to please men who will use their influence to repress religious liberty, and to set in operation oppressive measures to lead or compel their fellow-men to keep Sunday as the Sabbath. The first day of the week is not a day to be reverenced. It is a spurious sabbath, and the members of the Lord’s family cannot participate with the men who exalt this day, and violate the law of  God by trampling upon His Sabbath. The people of God are not to vote to place such men in office; for when they do this, they are partakers with them of the sins which they commit while in office. ” {GW 391}  ]