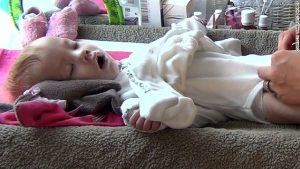 “A terminally ill minor has become the first child to be euthanized in Belgium since age restrictions were lifted in the country two years ago, according to several sources. A Belgian lawmaker told CNN affiliate VTM that the physician-assisted suicide happened within the past week. The child, who was suffering from an incurable disease, had asked for euthanasia, Sen. Jean-Jacques De Gucht told VTM. The identity of the child and age are unknown.” –Source

The article either got it wrong, or purposely twisted the facts to make it seem ok to kill the child since they claim the baby asked to be killed. #1, the child’s age is actually known. The little girl was ten months old. And #2, the author of the article, or the editor of the author’s article lied when they said the child asked to be murdered. A ten month old baby cannot ask or even understand such a thing let alone speak full sentences. This is nothing more than a gilding of the lily so as to make killing a little girl seem moral, legal and necessary. And just as the word “abortion” makes child murder seem less shocking for some, the word “euthanasia” has been doing the same thing for decades upon the minds of those without morals. And now, seeing how the blood thirsty doctors who kill people are hungry for more blood, they have now made it legal to kill little children as well.

What this insanity also does is make it impossible for Jesus to be glorified in how He heals people miraculously. As is the norm today, most go to doctors in seeking a healing FIRST before even contemplating the promises of Christ Jesus in the Word regarding such things. Still, there are many that have seen His hand move and so yes, that happens on a regular basis. But when that latter rain falls more abundantly even more poor souls unable to get proper care due to Socialistic medicine (likeObamacare) will cry out to the Lord Jesus for help because even though Rome and her cohorts claim there are many gods out there from Allah to Shiva. Basic reality is, NONE of them heal or change hearts like Jesus Christ does. And so, Satan is shuffling off as many deceived souls into the pits of hell by getting them to trust their doctors’ diagnosis when they say they are incurable so as to prevent losing them as trophies. But not for much longer… MARANATHA!