Dutch set to permit euthanasia for a ‘complete life’ 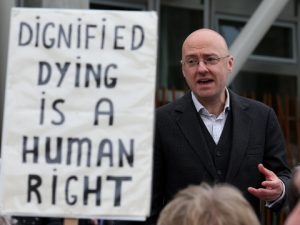 AMSTERDAM, Netherlands – The Dutch government is set to legalize euthanasia for people who don’t want to live anymore but are not necessarily terminally ill or experiencing extreme suffering.

In a briefing to parliament on Wednesday, the health and justice ministers said that people who “have a well-considered opinion that their life is complete, must, under strict and careful criteria, be allowed to finish that life in a manner dignified for them.”

The option would be limited to “the elderly,” though the briefing did not define an age limit.

The move is the latest expansion of the country’s euthanasia policy, which critics have already have said does not protect vulnerable populations, including children, the disabled and those with mental illnesses.

Earlier this year, critics decried a case in which a Dutch woman in her 20s was euthanized after her mental health condition was declared “insufferable” by a team of doctors and psychiatrists in the Netherlands.

She had suffered from post traumatic stress disorder (PTSD), anxiety, and other mental illnesses as a result of being a victim of sexual abuse. Multiple reports classified her condition as “incurable,” thus legally justifying the woman’s death by euthanasia under Dutch law. The woman was just one of many who have been legally euthanized due to mental illness since the law began.

The country’s law also provides provisions for children ages 12-15 to request euthanasia or assisted suicide with parental permission, a safeguard that does not apply to minors age 16-18. There is also a provision for newborn infants to be euthanized if a certain set of criteria are met.

The neighboring country of Belgium became the first country to legalize the euthanasia of minors without an age limit, with parental consent and the consultation of other medical professionals.

Under physician-assisted suicide, the patient’s doctor provides the means of death, such as lethal prescriptions, but legally only the patient can administer the drugs to themselves.

In 2002, the Termination of Life on Request and Assisted Suicide (Review Procedures) Act decriminalized euthanasia and assisted suicide for physicians who were acting under a certain set of criteria, which included the nature of the patient’s request (that it be persistent and voluntary), that the patient’s suffering is unbearable with no prospect of recovery, and the conditions of the request were confirmed by at least two doctors.

According to reports from The Guardian the new “completed life” proposal came as a surprise after a commission tasked with studying the policy concluded there was no need for it.

But the health and justice ministers disagreed.

“The cabinet is of the opinion that a request for help (in dying) from people who suffer unbearably and have no hope without an underlying medical reason can be a legitimate request“.

The push for legal euthanasia and assisted suicide has increased in Western countries in the past few years. In June of this year, Canada legalized physician-assisted suicide, as did the state of California, joining the states of Oregon, Washington, Montana and Vermont.

Also in June of this year, Pope Francis denounced physician-assisted suicide as part of a “throwaway culture” that offers a “false compassion” and treats a human person as a problem.

Addressing medical professionals from Spain and Latin America at the Vatican, the Pope criticized “those who hide behind an alleged compassion to justify and approve the death of a patient.”

“You are well aware of the meaning of the triumph of selfishness, of this ‘throwaway culture’ that rejects and dismisses those who do not comply with certain canons of health, beauty and utility,” he said.

“True compassion does not marginalize anyone, nor does it humiliate and exclude – much less considers the disappearance of a person as a good thing.”

The “completed life” extension is expected to go into effect in the Netherlands by the end of 2017.