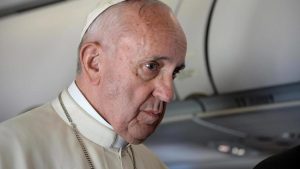 “It is hypocritical to call yourself a Christian and to chase away a refugee, or anyone who needs your help. Jesus taught us what it means to be a good Christian in the parable of the Good Samaritan,” Francis said in a meeting with German Lutheran pilgrims at the Vatican.” –Source

First and foremost we all need to understand who is talking here. This is not just a Pope, aka man of sin as prophecy calls him, he is a Roman Catholic Jesuit priest to boot. Click here to read the oath he took to become a Jesuit. (very graphic!) And if you read the Jesuit oath, and especially what I call the “red paragraph” you will see this man is the ultimate hypocrite.

What he’s not saying here is far worse that what he is saying. Yes, Jesus said we must help people. But Jesus never said we must openly help people kill us and our Christian brethren, nor would Jesus ever condone breaking laws of the land as this and all previous Popes demand of American Catholics when it comes to the influx of illegal aliens that bolster the Catholic voting bloc. If it’s as this Pope claims when it comes to refugees, then all those that helped Paul descend the wall in a basket to escape his killers are also hypocrites. There’s a big difference between lending a helping hand as Christ would offer and lending a helping hand as Satan would offer.

Jesus also said to care for the little children. In fact He even declared in Matthew 18:6, “But whoso shall offend one of these little ones which believe in me, it were better for him that a millstone were hanged about his neck, and that he were drowned in the depth of the sea.” Yet this Pope and every single Pope before him since theinfamous Didache documents were penned exposing the child rapists in the Vatican churches are all card carrying pedophiles and yes, that also makes them hypocrites. And yes, when you defend pedophilia and protect those that rape innocent children, you are in fact a pedophile in the same way someone refusing to stop a murder is an accessory to that crime.

Jesus also taught us not to kill our fellow man yet at least count according to the Foxes book of martyrs, the Popes of Rome have killed hundreds of millions of Christians. Does this not define them as hypocrites as well? The Popes have always said in the public arena that killing your fellowman was sin, yet they have also admitted in thousands of court rooms and tribunals to killing hundreds of millions of Christians. Not to mention the oath of the Jesuit wherein they promise to kill for the “Lord God the Pope.”

Yes, I can go on for hours about the hypocritical Popes of Rome on every topic known to man regarding lying, stealing, blaspheming and even bowing before idols just to name a few; but you get my point here I’m sure. That being of course; the only reason Satan set up shop on those seven hills of Rome is so he can con to masses into thinking his man at the helm is moral so that they can get away with making statements that those lukewarm and backslidden Christians that refuse to read Bibles think are profound and Heaven inspired. But then, that is to be expected when you refuse to read the Word of God daily.

This Pope and ever Pope before him is Antichrist! In fact, every denominational leader since day one has stated in writing they are Antichrist. Yet most people in those same churches don’t know about this because their Pastors are in bed with the Pope just as prophecy predicted. And this is why they feel they can use Scripture to their political advantage. In fact, have you noticed lately? The only time this Jesuit Pope ever quotes Scripture is when he can bolster a political agenda that will help him further the enforcement of the mark his dying god demands he must enforce for him so as to gain power in hell. And because this Pope, like all others before him, and this includes all Satanists who love to live in the lies, Satan has them right where he needs them. They actually think they will reign with Satan in hell when in fact we, the obedient people of God will eventually walk upon their ashes if they refuse to repent before they breathe their last. Pray for them.

Pope Francis found guilty of child trafficking, rape, murder* Muslims use government to attack Christian church * See what’s going on under the noses of ISIS! * VIDEO: Universe contains 10 times as many galaxies as previously estimated * President Obama: We’ll be debating unconditional free money ‘over the next 10 or 20 years‘ *Ministers back assisted suicide for people who feel their life has been completed * Unknown illness spreads from woman to deputies and hospital staff in Coos County *Corruption in US Government in highest levels! * VIDEO: 7 Ways Russia Is Telling People to Prepare for War * Untreatable gonorrhea new superbug crisis