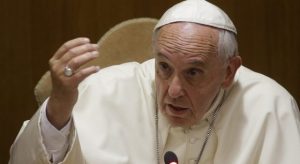 “On the surface, this seems like such a simple request…it’s not! After digging and finding the TRUE agenda on the climate change scam, it’s very clear that this entire thing is an effort to redistribute wealth around the world. Don’t believe us? Just check out the comments from the people attending the Paris Climate Summit:” –Source

When speaking of the man of sin in Rome, the prophet Daniel said long ago the following truths. “And through his policy also he shall cause craft to prosper in his hand; and he shall magnify himself in his heart, and by peace shall destroy many: he shall also stand up against the Prince of princes; but he shall be broken without hand.” -Daniel 8:25

There are only three ways to understand what the Popes in Rome are up to. #1, you must be a prelate in Rome privy to their wicked agenda when it comes to global rule. #2, you must be one familiar with political science and in a position of power wherein you are used by the Pope to further that same agenda. Or #3, you are a student of prophecy who understands the prophetic Word of God.

Being a student, I can see why the Pope in Rome is pushing global warming as a way to get all political leaders in the same camp. On the surface, as the author of this article intimates, it allows for a redistribution of wealth which is also something students of prophecy knew about long ago. That appeals on two political plains. #1, the died in the wool Socialist that seeks to gain the upper hand over those he rules, and #2, the uneducated masses who are dirt poor and actually believe a redistribution of wealth will mean they somehow benefit by the political promises by getting more rice in their bellies. Yes, as they have done so often before, a few token families will be paraded before the cameras to make it appear they are helping the needy when the other shoe drops; but as Poland saw when Roman Catholic emperor Adolph Hitler finally gained power over their people, his campaign promises were all a farce so as to bring about a Socialist rule wherein the rich get richer and the poor get poorer.

Still.. what most miss, and this includes the elite who are chomping at the bit trying to get at that golden carrot Rome is dangling; the Socialist format is the only way Rome can enforce her mark globally. And it must be a globalist version of socialism to boot. The elite only see the golden carrot that will fill their silk lined pockets, the poor see a smaller version of the same carrot that looks to fill their aching bellies, and the rest see a way to bring peace on earth when all national borders are removed. But none of them seem to realize they too will be forced to receive the mark! And to assure the select few that may actually jump off their couches to revolt, they have them hornswoggeled as well by using men like Jesuit coadjutors Alex Jones who cons them into thinking someone is in their corner fighting for them so they can continue to sit back watching TV.

As Daniel prophesied, the craftiness of the Popes in Rome is of demonic inspiration. No man or group of men can come up with a way to cover all bases without the enemy of their own souls CONvincing them it’s all for the better. Even the Pope himself will end up burning in hellfire as well for it is plainly stated in Proverbs 14:12, “There is a way which seemeth right unto a man, but the end thereof are the ways of death.”

Satan uses that written truth to his advantage on many souls all over this world. From the drunkard in the gutter to the elite drunk with power. He uses the prelates of Rome as his favored tool to get his hellish agenda met. And next to no one seems to realize that the promises of riches and world-wide peace is nothing more than a smoke screen that will eventually get them all standing in line willing, ready and able to receive the mark of the Roman Catholic beast. What’s worse? 100% of every soul on earth that stand sin that line will have been warned by the Lord that made them in ways they cannot doubt or refute. But all of them will receive the mark anyway for a multitude of reasons. It was prophesied, it will happen and it will happen soon. Maranatha!