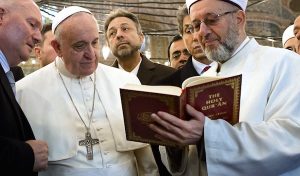 “-no comments posted on this Vatican video.” – Source

Why is it the Pope is suddenly going to Sweden? I believe it’s obvious and the timing is key here. What do I mean? For those that haven’t been following this. Notice the following articles in the list compiled below. The articles are not posted in any particular or chronological order. I posted them as I found them while confirming my discernment on this. I’ve posted some over the years and some are as old as 2004! When I saw this video and a few recent articles about the Pope’s interest in Sweden the Lord reminded me of what’s been going on in Sweden over the years. For the most part, this has been going on without international alert for over a decade!

Those of us that like to keep an eye on political and religious movements globally in these last days so as to help our brethren stay up to date as per the times we live in, and especially when the man of sin is involved, we know all too well how the Popes of Rome work. Sweden has been a member nation to the Pope’s New World Order since 1982, and being as such they are often tested, (as are all members) to see if they are a loyal political puppet. The Vatican needs to make sure the political leaders of each member nation is on the same page and will do whatever the Pope commands. This includes doing one thing publicly while agreeing behind closed doors to do another more sinister act.

As we all know about the long understood promiscuous culture of Sweden second only to Roman Catholic Brazil; it was only a matter of time before Satan moved them to make an open and obvious show of loyalty to the largest known organized Antichristian entity on earth. The Vatican. Once the Pope saw Sweden’s open arm approach towards Islam he was intrigued and a dialog quickly began. But it wasn’t until the bold sign of allegiance, which in this case happens to be the acceptance of common cultural fruits of ancient paganism in the ways of sexual assault brought on by the Muslims who trust in their Vatican / Pagan inspired Koran, and the ignoring of such crimes (as the articles above point out repeatedly) or even bowing to the crimes by watering them down in the courts using the excuse that it’s just “Islamic culture” and thereby acceptable in the courts, as certain Islamic demands towards women being allowed and legalized confirmed. It was then the Pope realized he had a true friend in Sweden. And that is the only reason I believe he is heading to Sweden. He knows for a fact that he has a major player in Sweden who will prop up the agenda of Rome when it comes to the NWO; of which the prophet Daniel prophesied regarding those Ten Toes. And so the Pope is going to race to Sweden to strike a deal while the iron is hot.

Now that he knows Sweden will allow Muslims to run rampant across the land with very few if any being jailed or punished in the courts. Or worse yet pass laws to help them flourish as well as gain what appears diplomatic immunity for violent crimes like rape; the next step towards installing Sharia law in the courts isn’t too far off for Sweden. Especially since some cities are already demanding women wear the garb of the Muslim to prevent rape (which it never does) or the special swimming hours for “women only.”

Just as the Vatican inspired playbook of Islam stated long ago, they enter in the nation as “friendly” to all peoples, they then grow in number to become a significant voting bloc. After a certain number is reached in the population, Shariah law is slowly introduced court by court and city by city and then violence kicks in as their numbers grow. However, as we can see globally.. their growth is too slow for Satan because he knows his time is short. And so, the so called refugee crisis was fabricated using Vatican wars and proVatican propaganda in the Press and wallah, here comes the Vatican’s new and unimproved god, “Allah.“