Don’t listen to the ‘prophets of doom,’ Pope Francis insists 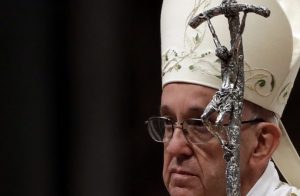 ROME- Pope Francis on Sunday called for the faithful not to be driven by end-times curiosities or apocalyptic preachers, urging them to focus on what is truly important: “The Lord and our neighbor.”

“Those who follow Jesus pay no heed to prophets of doom, the nonsense of horoscopes, or frightening sermons that distract from the truly important things,” Francis said.

It is important, he continued, to distinguish “the word of wisdom that God speaks to us each day” from the shouting of those who use “God’s name to frighten, to nourish division and fear.”

Francis’s words came as he was celebrating Mass at St. Peter’s Basilica, in Rome.

The celebration was one of the events of the Holy Year of Mercy, and it served as the closing point of the Jubilee for the Socially Excluded, which began on Friday, when the pontiff encountered thousands of homeless people from around Europe.

Throughout the weekend, the poor and marginalized had the VIP seats, including at a concert from Oscar-winning composer Ennio Morricone. To guarantee that they could understand the pope’s homily, they had been given small orange radios, from which they could follow the celebration in their own languages.

The pope’s homily turned around the day’s Gospel, in which Jesus speaks about the destruction of the temple of Jerusalem and the end of times. As the pontiff put it in his homily, Jesus says that “there will be no lack of conflicts, famine, convulsions on earth and in the heavens” when the time comes.

In the Gospel, Francis said, Jesus’s aim is not to produce fear. Instead, God “asks us to persevere in the good and to place our trust” in him, “who does not disappoint.”

And Sunday’s passage is also Jesus’s way of saying that every earthly thing “will inevitably pass away.”

“Even the strongest kingdoms, the most sacred buildings and the surest realities of this world do not last forever; sooner or later they fall,” the pontiff said.

Francis then said that there are only two riches that won’t disappear, and as such, shouldn’t be excluded: “The Lord and our neighbor,” because everything else, he insisted, including the heavens, the earth and the St. Peter’s Basilica, shall pass.

From here, Francis transitioned to talk about the VIP guests: the poor and marginalized, who came from 22 European countries, many with the help of the charitable France-based charitable organization Fratello, that wants to make this pilgrimage of the homeless to Rome a yearly thing.

When speaking about exclusion, the pope said, “we immediately think of concrete people,” yet the human person, “set by God at the pinnacle of creation,” is often discarded in favor of “ephemeral things,” and this, he added, is “unacceptable.”

Speaking to no particular group, Francis denounced that people are growing used to rejection, saying that these “anesthetized consciences,” which lead to “no longer seeing the brother or sister suffering at our side, or noticing the grave problems in our world,” is something to be worried about.

Being only interested in objects to be produced rather than on persons to be loved, the pope noted, “is a sign of spiritual sclerosis,” and a turning away from God himself.

“This is the origin of the tragic contradiction of our age: as progress and new possibilities increase, which is a good thing, less and less people are able to benefit from them,” Francis said. “This is a great injustice that should concern us much more than knowing when or how the world will end.”

The poor, Francis said closing his homily, belong to the church by evangelical right and duty, “for it is our responsibility to care for the true riches which are the poor. In the light of these reflections, I would like today to be the “day of the poor.”

Having begun on December 8, the Holy Year of Mercy will come to a close on Nov. 20, the day on which the Church marks the Solemnity of Christ the King. However, across the world, the holy doors of mercy, which every diocese was called to open in the local cathedral or other churches of particular relevance, were closed this weekend.

These doors reflected Francis’s desire that the jubilee be celebrated on the local level and not just in Rome. The first such door was opened by the pope himself in the cathedral of Bangui, capital of the Central African Republic, during his visit there last November.