The Pope is using Islamic Terrorism to push Ecumenism?! 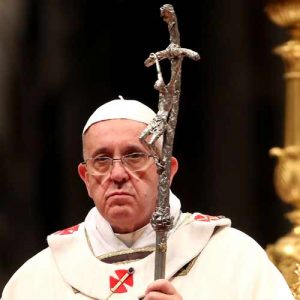 “When terrorists or world powers persecute Christian minorities or Christians”, he observed, “they do not ask: ‘Are you Lutheran? Are you Orthodox? Are you Catholic? Are you Reformed? Are you Pentecostal?’ No. ‘You are Christian’. They recognise one only: the Christian. The enemy is not wrong: he recognises where to find Jesus. And this is the ecumenism of blood. Nowadays we are witnesses to this, and I think of the Orthodox brethren beheaded on the beaches of Libya, for example: they are our brothers. They gave witness to Jesus and they died saying, ‘Jesus, help me!’. With His name: they confessed the name of Jesus.” “Therefore, ecumenism in prayer, ecumenism in our journey, and the enemy teaches us the ecumenism of blood.” –Source

The man of sin will stop at nothing to garner more souls into the Babylonian church. The craftiness of his speeches wherein he expertly twists the truth regarding the plight of Christians who die for their faith is appalling to say the least. He is using their deaths as an global call for ecumenicalism. But this shows his card a lot more graphically that even he can surmise.

What I’m getting at here is the fact that those of us that have done our homework know, #1, the Vatican has been all about creating the prophesied One World Church since the ecumenical dogma was introduced at Vatican II. And #2, those of us that have eyes to see who have not been blinded by the false claims that Islam is THE Antichrist or even that Turkey is somehow to be seen as the King of the North, we know the Popes of Rome wrote the Koran 20 years before Mohammed was born so as to have an army of loyal pawns that will do her bidding towards global dominance near the end of time.

With these two obvious factors in mind, the Jesuit Pope has given us a glimpse of the ace up his cassock sleeve. The fact history records the genocidal martyrdom of hundreds of millions of Christians during the Vatican’s prophesied Inquisitions, and the fact the Muslims are not only loyal to the Pope of Rome via their own salute, they are doing as commanded by killing just as many Christians each year for the Pope just as the Civil authorities did during the Inquisitions. We now have concrete evidence the Pope of Rome, a sworn by blood oath Jesuit, has declared the martyrdoms of millions of Christians today is in fact the means by which his office has chosen to validate his agenda towards the long prophesied ecumenical church of Rome that his dying god needs as his Armageddon troops.

This evil act not only helps the Pope push his agenda forward towards building that very army he will hope to use to surround the few that escaped his blade on that great and dreadful day. It allows him to lower our ranks by millions using the Muslims to kill our brothers and sisters all around the world. But then, prophecy never said there would be millions standing in the number we affectionately call the Gideon Band. As prophesied, we will only see 144,000 standing in that number during the Plagues. That all being said… are you prepared? ARE YOU SURE?