It’s the city where his political career began — where he had given his victory speeches on election night in 2008 at Grant Park and in 2012, also at McCormick Place.

And it’s the city where, he said Tuesday, he “began working with church groups in the shadows of closed steel mills. It was on these streets where I witnessed the power of faith and the quiet dignity of working people in the face of struggle and loss.” 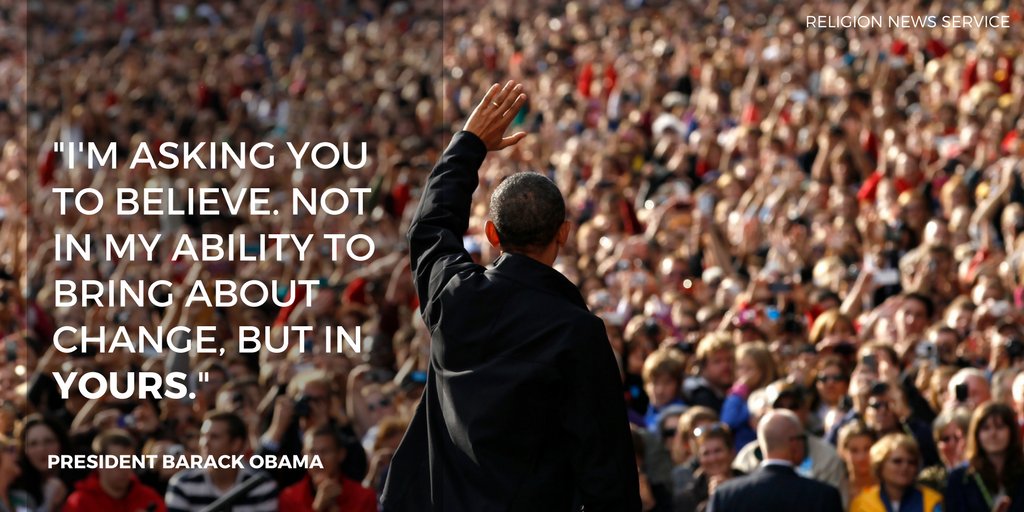 “This is where I learned that change only happens when ordinary people get involved, get engaged and come together to demand it,” he said.

That’s not just his belief, he said. That’s “the beating heart of our American idea,” and it’s a theme the president returned to throughout his speech.

Obama touted what he saw as the successes of his presidency, including those that have received pushback from the religious right: the Iran nuclear deal, marriage equality and the Affordable Care Act. His statement that he rejected discrimination against Muslim Americans drew prolonged applause and cheers. President-elect Donald Trump, during the election campaign, proposed a registry for Muslims and a ban on Muslim immigrants entering the country.

The outgoing president encouraged Americans to listen better and try harder, to realize that “science and reason matter,” to assume the best of others. That’s important in a time, he said, when it’s “become safer to retreat into our own bubbles, whether in our neighborhoods or college campuses or places of worship or our social media feeds, surrounded by people who look like us and share the same political outlook and never challenge our assumptions.”

Addressing his supporters who may be worried about the next four years, he urged faith in this nation’s founding ideas.

“For every two steps forward, it often feels we take one step back,” he said. “But the long sweep of America has been defined by forward motion. A constant widening of our founding creed to embrace all, and not just some.”

The president warned against disengagement, urging those listening to get even more involved in politics.

“If you’re disappointed by your elected officials, grab a clipboard, get some signatures and run for office yourself,” he said. “Show up. Dive in. Stay at it. Sometimes, you’ll win. Sometimes you lose.

“More often than not, your faith in America and in Americans — will be confirmed.

“That faith I placed all those years ago, not far from here, in the power of ordinary Americans to bring about change — that faith has been rewarded in ways I couldn’t possibly have imagined,” he said.