Order of Malta snubs Pope Francis, dismissing as ‘irrevelant’ a Vatican inquiry into the sacking of a senior Knight 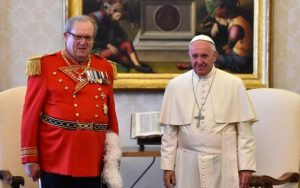 An ancient chivalric order led by a British former Guards officer has dismissed as “irrelevant” an investigation launched by Pope Francis into the dismissal of a senior knight, in an increasingly bitter row with the Vatican.

The Pope announced before Christmas that he had set up a commission of inquiry into a controversial decision by the head of the Order of Malta, Cambridge-educated Matthew Festing, to sack one of his deputies, Albrecht von Boeselager.

Mr von Boeselager, a German aristocrat whose title was Grand Chancellor, was accused of allowing a branch of the charitable organisation to distribute tens of thousands of condoms in Myanmar, in contravention of Catholic teaching.

He insisted that he was unaware of the condom distribution programme and that as soon as he heard of it, he had it suspended, but that was not enough to prevent his sacking.

The five-member papal investigation into his dismissal is supposed to report back to Pope Francis by the end of the month, but Mr Festing, whose full title is His Most Eminent Highness, Prince and Grand Master, has refused to cooperate with it, saying it has no authority and is legally “irrelevant”.

In an unusual snub to the Holy Father, the Grand Master put out a statement in which he argued that the Vatican had no jurisdiction over the Order, also known as the Knights of Malta, because it is a sovereign entity.

The dismissal of the Grand Chancellor was “an internal act of the government of the Order,” he said, in effect telling the Pope to mind his own business.

“Thus, considering the legal irrelevance of this group and of its findings relating to the legal structure of the Order of Malta, the Order has decided that it should not cooperate with it.”

The Order argued that it has diplomatic relations with the Holy See and is regarded by the Vatican as an independent state.

The charitable organisation also warned its members that if they decided to talk to the papal commission, they should on no account contradict what the Grand Master has said about the sacking of his Grand Chancellor.

“The depositions that individual members consider that they could make to the (investigation) cannot be in contradiction, directly or indirectly, with the decision of the Grand Master and the Sovereign Council concerning the replacement of the Grand Chancellor,” a statement said.

But Mr von Boeselager is refusing to go without a fight and has accused the Grand Master of behaving in a manner “more reminiscent of an authoritarian regime than one of religious obedience”.

He has vowed to contest his dismissal, saying it was in violation of the Knights’ constitution and that the accusations against him were groundless.

The extraordinary spat between the chivalric order, which traces its origins back to the Crusades, and the Holy See, reflects broader conflicts under the papacy of Francis.

Mr Festing is said to have the backing of Raymond Burke, a conservative American cardinal who has been highly critical of Pope Francis and who reportedly regarded Mr von Boeselager as being too liberal.

Cardinal Burke was involved in a rancorous dispute with Pope Francis at the end of last year after he accused the pontiff of contradicting Church teaching over the issue of whether divorced Catholics who civilly remarry should be allowed to take Communion.

In a direct challenge to the Pope’s authority, Cardinal Burke and three other conservative cardinals accused him of creating “grave disorientation and great confusion” among Catholics with his remarks on the divorce issue.

Cardinal Burke has been a thorn in the side of Pope Francis ever since the pontiff was elected in March 2013.

In an apparent attempt to sideline him, the Pope moved him away from key Vatican positions in 2014 and made him patron of the Knights of Malta – in effect the Holy See’s liaison with the Catholic order.  It is supposed to be a largely ceremonial post but Cardinal Burke has remained highly critical of the Pope’s attempts at reform.

Formally known as the Sovereign Military Hospitaller Order of Saint John of Jerusalem, of Rhodes and of Malta, the chivalric order was founded in the 11th century in Jerusalem, and was once a rival to the equally powerful and secretive Knights Templar. It cared for pilgrims making their way to the Holy Land and was officially recognised by the Vatican in 1113.

Mr Festing is only the third Briton to have led the Order since it was established. The Order operates in more than 100 countries, operating clinics and hospitals and providing medical services in conflict zones and regions hit by natural disasters.