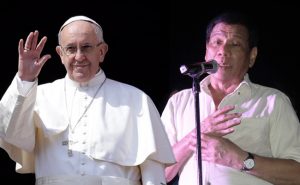 Pope Francis will bless the Philippines and its leader Rodrigo Duterte, an aide to the president said, in a gesture of goodwill to a controversial figure known for his lurid lambasting of priests and bishops.

“When I had the opportunity of kissing the hand of the Pope, I said, ‘Bless the Philippines, Your Holiness,’ and his answer was, ‘Yes, I will also bless your president,'” presidential adviser Jesus Dureza said in a video clip at St. Peter’s Square, shown on television Thursday.

Dureza is in Rome ahead of peace talks between the government and Philippine Maoist rebels.

He met Pope Francis at the Vatican and delivered a letter from Duterte thanking him for his 2015 visit to the Philippines, which has Asia’s biggest Catholic population.

Duterte famously called the Pope a “son of a bitch” for causing traffic snarl-ups at that time. He has since apologized and said his remark was aimed at incompetent officials.

The Philippine firebrand has often targeted priests at home, especially those critical of his deadly war on drugs.

On Wednesday, he accused several unnamed priests of having multiple marriages and suggested they try “shabu,” the crude methamphetamine at the heart of the crackdown, so they can experience its effects.