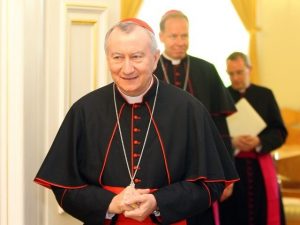 “The Cardinal also recalled recent comments by Pope Francis, saying that “there is a risk of history repeating itself.” In a lengthy interview with the Spanish daily El País in late January, Pope Francis was asked whether he was concerned about the spread of a populism that capitalizes on “people’s fears,” preaching “a message of hate.” In his reply, Francis distinguished between a good, grassroots populism, where it is the people who are “the protagonists,” and a cult of personality where a charismatic figure like Hitler rises to power and is welcomed as a savior figure.” –Source

Ironic don’t you think? A Jesuit Pope who took the bloodcurdling Jesuit oath uses Roman Catholic emperor Adolph Hitler as his example of what can happen when such a political monster, which by the way his very own papal predecessor funded, puffed up and installed as emperor. But because most people are purposely dumbed down all over the world on Scripture as well as historic facts, they don’t realize how he’s playing both ends against us in the middle.

And as for his claims of history repeating itself. It’s obvious that he seeks to make the case (using the same fear he condemns) that we will see another Hitler if the people don’t stop distrusting him and his cohorts when in fact I can’t help believe that he made the statement because of his inherent fear that yes history will repeat itself and like his office saw in 1798 when Napoleon came as prophesied to pull the Pope from power, Francis no doubt fears the same will happen to him. And so to hide his fear he claims we have fear of a possible Hitler coming to power. How do I know this is in his mind? Besides the fact that his Vatican is prophesied to soon burn to ash, his use of the word “populism” confirms he, being one of the “elite” he speaks of, fears that the people will eventually revolt. The word populism is defined as “a political philosophy supporting the rights and power of the people in their struggle against the privileged elite.” (See online definition here)

The fact that the people have wised up (if only in the secular sense) to the fact that the powers that be have gone far beyond simple corruption to downright political insanity proves he, like the fearful Congressmen in the USA, are scared out of their wits that the people will surround them and revolt. Hence the  reason for the talking points on martial law as well as the bold delivery of military tanks to every city in America. But nothing says it more boldly and succinct than the present Pope’s well documented agenda towards a New World Order that is obviously based on a Roman Catholic form of Socialism. And yes, that is the exact same format Hitler used in his day!