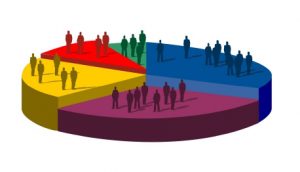 Despite a contentious U.S. election in which religion played a major role, as well as the continuing scourge of religious-inspired terrorism worldwide, a new survey finds that Americans have warming attitudes towards virtually all major religious groups in the country.

The new Pew Research Center survey, released Wednesday, finds that Jews and Catholics get the highest ratings on a “feeling thermometer,” with a mean rating of 67 and 66 respectively on a thermometer that ranges from 0 to 100.

Mainline Protestants were just behind at 65. Evangelical Christians finished at 61, Buddhists 60, Hindus 58, Mormons 54, atheists 50 and Muslims 48. Even the relatively low ratings for atheists and Muslims, however, represent increases over the last such survey in June 2014.

The increase in positive feelings towards religious groups, according to the authors of the survey, hold true across all major groups, including Democrats and Republicans, men and women, and youth and older adults.

One key finding, however, is that there’s a wider range of opinion among older Americans than youth, with respondents 18-29 giving Muslims a 58 rating while for those 65+, the response was just 44. Older Americans, meanwhile, rate mainline Protestants at 75, while the young only put that group at 59.

The survey was conducted Jan. 9-23, 2017, and thus ahead of President Donald Trump’s controversial executive order on refugees, which many saw as a “Muslim ban.”

According to the results, roughly half of American adults rate Catholics very highly, at 67 degrees or above on the “feeling thermometer.” However, that figure includes a substantial share of Americans who are themselves Catholic. In terms of just the non-Catholics, 43 percent put Catholics at 67 or higher.

By far, American Catholics give fellow Catholics the highest rating, at 83, followed by 68 for Jews, 66 for mainline Protestants, and 63 apiece for Evangelical Christians, Buddhists and Hindus. Overall, Catholics gave a 49 rating to Muslims and 48 to atheists.

The survey found there’s one case in which two religious constituencies have decidedly cool opinions of one another – Atheists rate Evangelical Christians at 29 degrees, while white Evangelicals place atheists at 33.

Catholics are the second-highest rated religious group among both Democrats and Republicans, according to the results. Democrats put Jews first at 66 and then Catholics at 64, while Republicans put Evangelical Christians at 71 and Catholics at 69, just ahead of Jews and mainline Protestants.

Two other results from the survey are worth noting.

Second, personal friendship also appears to have a strong correlation with favorable attitudes, as in every category Americans who said they are personally familiar with someone in that group gave a higher rating to the group.

For example, Americans who do not know a Buddhist gave only a rating of 56 degrees on the feeling thermometer, but those who do gave a rating of 75.

That may help explain the high favorability rating for Catholics, as 87 percent of Americans said they personally know a Catholic, 10 points ahead of the next-highest group, “not religious,” at 77 percent.