Vatican, Al-Azhar team up to counter religious justification for violence 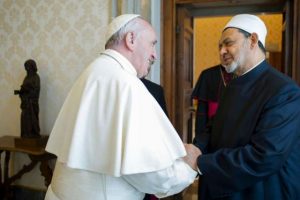 The Vatican and one of Islam’s most renowned schools of Sunni thought are joining forces to discuss how they can work together in combating religious extremism that uses God’s name to justify violence.

On Feb. 21 the Vatican announced that Cardinal Jean-Louis Tauran, president of the Pontifical Council for Interreligious Dialogue, will travel to Cairo to participate in a special seminar at the Al-Azhar University.

He will be joined by the council’s secretary, Bishop Miguel Ángel Ayuso Guixot, and the head of their Office for Islam, Msgr. Khaled Akasheh, to discuss the theme “The role of al-Azhar al-Sharif and of the Vatican in countering the phenomena of fanaticism, extremism and violence in the name of religion.”

The meeting will take place “on the vigil” of Feb. 24 in honor of Pope Saint John Paul II’s visit to the university on that day in 2000. It will also be attended by the Holy See’s ambassador to Egypt, Archbishop Bruno Musarò, as well as various representatives from Al-Azhar.

Currently Ahmed al Tayyeb, the Imam of al Azhar is considered by some Muslims to be the highest authority the 1.5-billion strong Sunni Muslim world and oversees Egypt’s al-Azhar Mosque and the prestigious al-Azhar University attached to it.

Founded in the Fatimid dynasty in the late 10th century together with the adjoining mosque, the university is one of the most renowned study centers for the legal principals of Sunni Islam.

Al Tayyeb paid a visit to the Vatican May 23 for a meeting with Pope Francis, which marked a major step in thawing relations between the al-Azhar institution and the Holy See, which were strained in 2011 with claims that Pope Benedict XVI had “interfered” in Egypt’s internal affairs by condemning a bomb attack on a church in Alexandria during the time of Coptic Christmas.

Since then relations have continued to move forward at a surprisingly fast pace, leading to the Oct. 21 announcement from the Vatican that sometime this spring the Holy See and the Al-Azhar Mosque and adjunct University will officially resume dialogue.

After the announcement, the secretary of the Pontifical Council for Interreligious Dialogue, Bishop Miguel Ángel Ayuso Guixot, traveled to Cairo for an Oct. 23 meeting with a delegation from Al-Azhar to discuss the details.

Bishop Ayuso made a similar visit to Al-Azhar in July 2016, where he met with Sunni academic and politician Mahmoud Hamdi Zakzouk that to discuss the formal resumption of dialogue between the Pontifical Council for Interreligious Dialogue and Al-Azhar University, which culminated in the Oct. 23 encounter.

The current seminar, which is the work of several “preliminary meetings,” can been seen as the next step in officially restoring ties.

In an interview with Vatican Radio published May 24, the day after his historic visit to the Vatican, Al Tayyeb spoke out harshly against terrorism carried out by extremist Islamic groups such as ISIS, saying that “those who kill Muslims, and who also kill Christians, have misunderstood the texts of Islam either intentionally or by negligence.”

“We must not blame religions because of the deviations of some of their followers,” he said, and issued a global appeal asking that the entire world to “close ranks to confront and put an end to terrorism.”

If the growing problem of terrorism is neglected, it’s not just the east that will pay the price, but “both east and west could suffer together, as we have seen.”

In their Feb. 21 communique, the Vatican also announced that from Feb. 21-25 the annual meeting of the Board of Directors of the John Paul II Foundation for the Sahel will take place in Dakar, Senegal.

Founded by St. John Paul II in 1984, the foundation was establish by the late pontiff after his first visit to Africa, during which he came face to face with the daily suffering the people endured due to years of draught and desertification.

While the foundation was previously under the care of the Pontifical Council Cor Unum, the dicastery has since merged with several others to form a new, mega-dicastery for Integral Human Development, which is now responsible for the Sahel foundation.

The 5-day meeting will be attended by various representatives from the Holy See, including the new dicastery’s secretary, Msgr. Giampietro Dal Toso, who will participate as an observer, and the Vatican ambassador to Senegal, Archbishop Michael Wallace Banach.

According to the communique, discussion will focus largely on projects awaiting funding. In 2016 alone 43 projects in 6 countries were financed for a grand total of $550,000. Since the foundation’s beginning until 2015, they have financed roughly 3,200 projects in the Sahel region, for a total of more than $37,000,000.

With particular help received from both the Italian and German bishops conferences, specific projects focus on eliminating desertification and managing and developing agricultural units, as well as other projects aimed at providing water pumping systems and improving drinking water and renewable energies. The foundation also seeks to form skilled technical personnel.

Recent data from the Human Development Index, which measures the level of development in each country worldwide, shows that 19 of the 20 least developed countries on the list come from Africa, the communique said. Of these 19 countries, 7 are from the Sahel region.

In addition to desertification, the index lists several other factors that compound the situation, including frequent food crisis, the exhaustion of natural resources, particularly water, and violence carried out by extremist groups.