Scarlett Johansson: Monogamy Not ‘Natural,’ ‘A Lot of Work’ 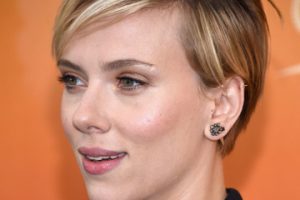 “I think the idea of marriage is very romantic; it’s a beautiful idea, and the practice of it can be a very beautiful thing,” the 32-year-old actress said in a feature interview for this month’s issue of Playboy magazine. “I don’t think it’s natural to be a monogamous person. I might be skewered for that, but I think it’s work. It’s a lot of work.” –Source

First of all, she is discussing this with Playboy magazine. The very first magazine that made fornication and adultery not only a household name, they made it completely acceptable in the minds of hundreds of millions if not billions of teenagers and adult men who after looking into their pornographic magazines desired all that the magazine glorified and went after it with a hellish fervor. And so it’s a no-brainer such sinfulness will appear natural and the God given sanctity of marriage as unnatural to those who bow to the lusts of the flesh.

It’s also a no-brainer as to why she is saying this now; a few years after homosexual marriage was legalized further declaring that which the Lord God Creator of all that is seen and unseen created in the Garden of Eden and set up as the perfect method by which to “be fruitful and multiply.” But as we also know, the sexual act wasn’t worshipped back in the days of Adam and Eve even after they fell and so it wasn’t like God was declaring a free-for-all cesspool of decadence and fleshly perversion as being “natural.” But these are the end times when like in Noah’s day the blessed sanctity of biblical marriage has been ridiculed, undermined and declared “unnatural” and even old fashioned by most.

Now yes, a monogamist relationship may be “a lot of work” as she claims for some. But in this age of convenience when most are apt to race towards the goal long before they even realize what that is, no matter how many dangers are involved both physically and spiritually. Hence the reason Proverbs 14:12 was penned that says, “There is a way which seemeth right unto a man, but the end thereof are the ways of death.” And so when you don’t read Bibles or even love the Author of the Bible, all that the flesh clamors after will be the sole foundation of every decision made in life. So be it, it’s not like this wasn’t the prophesied mindset of those racing towards damnation in today’s society.

One more thing, as we also know, Hollywood is the brain child of Satan himself. And as we also know it is the main reason society is such a mess today. Especially with our young people. They look at these movie stars as if they are moral and worth emulating and so they (the movie stars) do all they can to uplift the sinful nature so as to assure Satan’s trophy case is loaded to the hilt with all sorts of souls headed towards damnation.

VIDEO: Pastor recovering after being pistol-whipped during robbery * Queen’s chaplain resigns after criticising church for allowing Koran reading * VIDEO: Chile mudslides cut off water to millions * Danish Man who Set Fire to Quran Charged with Blasphemy * Swedish Prosecutor Refuses to Charge Migrant for Child Rape As Girl Got Pregnant Abroad * Pence Vows to End ‘Obamacare Nightmare’ * 4 charged in death of 9-year-old boy with cerebral palsy * Doctors are refusing to operate on smokers. Here’s why the trend will grow * ‘Teen Vogue’ Has Already Pushed Abortion to Teens 63 Times in 2017 * Black students demand whites be banned from their ‘space’ * Chopped off heads, torn out hearts in brutal Brazil gang war * Starbucks Brand Crashes After Announcement of Plan to Hire 10,000 Muslim ‘Refugees’ * FYI: VIDEO: Divided federal appeals court rules you have the right to film the police * VIDEO: Global Warming Is A blatant LIE & This video scientifically Proves it * Chicago Ends February Well Ahead of Violence Over Last Year with Another Four Dead, 10 Wounded * Car drives into crowd at Mardis Gras parade in Alabama, 12 injured