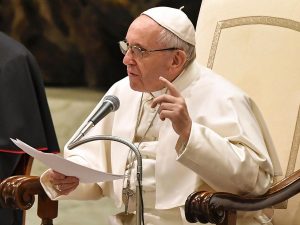 First off this Jesuit Pope aka prophesied man of sin stated that “populism is evil.” And do you know why he says that? You may be a bit shocked in this because he is banking on the “dumbing down” of the masses to slip this one by as well as having hope the elite that do understand will circle the wagons for him. But for some of you that may not know what that word “populism” means, I will define it for you.

Populism (pop·u·lism)
“A political philosophy supporting the rights and power of the people in their struggle against the privileged elite.” Definition #2 = a political strategy based on a calculated appeal to the interests or prejudices of ordinary people.” –Source

The Pope is part of the “privileged elite” and so of course it would be that “populism” is seen as evil by him because he has many under his foot all over the world. This is also how disconnected the Pope and just about every politician today that backs the Vatican Socialist Agenda have become under the expected end result of worshipping the dying god of this world.
Still, one has to wonder how on earth can this man sit there and declare the common man’s oppressed plight under the elite of this world to be evil? And no I do not advocate his folderol regarding spreading the wealth. Let the rich keep their money, they earned it. That’s not the issue here at all; even though the Pope and his cohorts make it out to be that way so as to allow talking points to flutter about like leaves of autumn. I mean after all, do you really think they will give up their money? They only use that excuse so as to garner support.
Ask any man who wants a real job and doesn’t want to sit on the couch all day waiting on a welfare check and you will find the real reason the common man distrusts the privileged elite is because of the way they are treated in society and how the government helps the elite oppress the poor by passing laws that pander to the elite alone which then cripples the common man’s world. But I think the Pope’s office said it best when in days not so far past they declared via Nazi war criminal Cardinal Ratzinger who was the right hand man of another Nazi war criminal who most know as Pope John Paul II in his day and later became Pope Benedict the 16th; he stated the following in writing no less.

This is why the present Jesuit Pope declares “populism” to be evil. It goes directly against what the elite have been doing to the common man for literally eons. And as Ratzinger admitted, they prefer “violence, homicide, mendacity” to keep the people in line so as to allow a “just Socialist society” to better empower the elite. And in case you didn’t now, “mendacity” = LIES!

The Pope also stated in the article that he rejects the title of “cult” proclaimed against him and his church and even states he is a “normal believer” so as to squash all opposition to that end. Well in today’s world, and thanks to the Vatican’s hellish work over the last 14+ centuries, most people in the world today believe as his office has indoctrinated them to believe thanks to all the churches bowing to the Pope in his one world church,  and the documents CONFIRM this includes the SDA church, and so even though the Bible defines Catholicism to actually be a cult wherein all 6 characteristics of a cult are in fact confirmed in Catholicism, (see my page and video on this here) as prophesied all have followed the Pope’s lead and so their “new and improved version of Jesus” is what’s considered truth and the Bible is declared hate speech and illegal by everyone that agrees with the Pope that you can be saved IN your sins rather than FROM your sin.

Bottom line is, the Pope can declare he is a “normal believer” with confidence and hellish pride because he knows that the overwhelming majority on earth believe as he does and therefore according to the world he is no longer considered a cult. All the world truly wonders after this beast. And as prophesied, evil has become good and good has become evil. But keep the faith brethren, for it is also written that the elect of God CAN NOT be deceived!