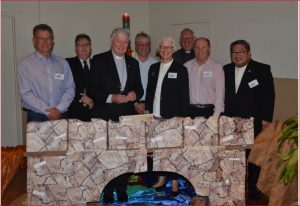 Port Pirie Bishop Greg O’Kelly said that the event coincided with the 500thanniversary of the Reformation – which occurred in part after Martin Luther nailed the ‘Ninety-five Theses’ to the All Saints’ Church door in Wittenberg, Germany – was an appropriate time to convene to discuss religious matters and focus on how far the Church had come.

“What unites us is much more than what divides us,” Bishop O’Kelly said.

“The splitting of the Church was followed by a lot of hatred and war and slaughter and persecution and dreadful mayhem, the Wars of Religion, which split the church and Europe and 500 years later we have come a long way.

“Whatever our structures and whatever our churches, Jesus Christ remains the reason why we exist and that is what is being shared his today.”

The event saw ministers from each religion involved in ecumenical services and also a panel, which discussed the similarities and differences between each of the religious orders.

He said the two days of celebrations reflected a “terrific spirit” among all parishioners and believed that the event could lead to a more positive future.

“This could be the beginning of something much better,” he said.

“They say ecumenism is easier in the bush.

“People get to know each other, depend on each other and it works much better together.

“To see so many people in the room from Ceduna, Port Lincoln, Streaky Bay, Coober Pedy, the Mid North and Riverland churches … it is just fantastic”.

He said that events like the Catholic Diocese Assembly would help pave the way for a better future.

“It just helps consolidate things and lead to new beginnings,” he said.

“Ecumenism is not about one church succumbing or surrendering to another – we’re not all going to come back and be Catholic again.

“What it is is celebrating that aspect of Christ that they want to live in the world.”

He thanked the event organisers, Northern Festival Centre staff and all those who attended.