Lawmakers across US move to include young people in voting 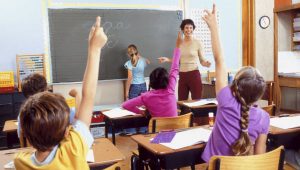 As we know all too well, the United States School system is nothing more than a indoctrination station for our precious boys and girls. They need to make them into mindless drones who will do whatever the government wants them to do when they eventually leave school and vote. The fact “common core” was adopted into the system coast to coast proves dumbing down the children is their main priority. I literally came across an article last week that I posted in the “additional article links” I post below the blog entry that reported on how a student’s answer to a math question was marked wrong even though the sum of the answer was correct.

The student answered the question with “5+5+5 = 15.” But the teacher wanted the answer to be “3+3+3+3+3 = 15” instead and so the student was declared wrong. In other words, the teacher, who is a government employee demanded the student to it their way, PERIOD. That kind of force and pressure will most assuredly generate an obedient drone is kept up.

Regardless of how and why the teacher’s excuse was as to why he or she wanted it done in that way makes no difference. The real question is why teach that folderol in the first place? It’s because it keeps the child’s intelligence in check. If the children are allowed to learn their multiplication tables as I did as a child (which was very difficult at a young age) it will allow them to learn how to use their brain more effectively early on and so cause them to grow in a manner that offers better thinking skills in adulthood. But the Government of Rome can’t allow that and so, as the term I heard from the 1980’s predicted, they are in fact “dumbing down America” so as to have drones vote that will allow the most wicked, debase, and downright evil leaders to gain office.

I repeat and will repeat again no doubt in the coming days for those that know, but I have NEVER voted and never will. I am neither Democrat, Republican or even so called Independent because even as a teen I saw how corrupt it all was. And so when I say the Democrats are behind this, it’s not because I am a Republican. The recent and still ongoing idiocies of the Democrats in America have gone so far off the chart they have to know by now that in two years when it comes for them to re-run for office in Congress or four years for the Presidency that their absolute insanities in the media and society itself shows they haven’t got a chance. And so they need to create more Democratic voting blocs and so this is just one more way to get that done.

Basic reality dictates that if the children can’t think, then they cannot see the danger in voting for people whose policies bring on the Socialist format in politics that Rome needs to enforce the mark. The fact most teens don’t have the wherewithal to even vote at the ripe old age of 8 proves this was their plan back in the 1970’s when the voting age dropped from 21 to 18. They knew allowing teenagers to vote who just graduated high school would help their cause. Reason being is, their indoctrination “lessons” forced on the children would still be intact in memory when standing in the voting booth. But to lower it to 17 not only guarantees it’s still intact, it confirms a windfall for the schools that for the majority are widely corrupted with antichristian theology. And just so you know, it will also grant them millions of new voters that could be forced (as a classroom assignment) to stand in line to vote for the candidate that has the school board’s best interests at heart. And as we also know, recent and even long-term historic fact is, ALL OF THEM are antichristian in nature. My homeschool spurs page proves that hands down with literally thousands of articles and videos!

One last thing.. Let’s say these impressionable children that blindly obey their teachers go forth into life to use the 3+3+3+3+3 = 15 mathematics when they try to get a job dealing with money, or a job that needs them to be able to think on their feet? It’s obvious they won’t be able to get that job anywhere and so AGAIN they will be forced to look to the US government to help them by placing them on government aid the rest of their lives. Sure, they may get a job slinging hash or digging a ditch, but it won’t be enough to survive and so they would most assuredly need food stamps. That being the case, when it comes time to vote again, they will definitely vote for the candidate that keeps their food stamp meal ticket intact. And then you will see a Socialist AmericKa just as Rome planned.