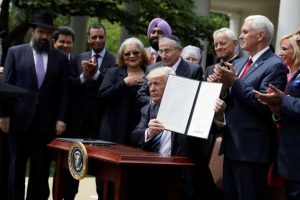 “An executive order (EO) signed by President Donald J. Trump this morning could welcome more overt political activity by charities and churches. It also appears to open the door for more litigation against his administration. …The full EO was released this afternoon and what it actually does could be up for debate. The EO states that it will be the policy of the executive branch to “vigorously enforce federal law’s robust protections of religious freedom,” and will honor and enforce those protections. It goes on to state that the Treasury Secretary will ensure that the department does not take adverse action against any organization for “speaking about moral or political issues from a religious perspective, where speech of similar character has not ordinarily been treated as participation or intervention in a political campaign on behalf or opposition to a candidate for office.” –Source

As was revealed and then shared back in July of 2016 in a video I made, Trump will never remove the prophesied 501c3 even though many preachers and pastors hoped and declared otherwise. Prophecy must be fulfilled and to remove that government contract now will prevent it from fulfillment. What he will do (as we saw yesterday) is change how that contract is written, or as the headline of the article I link out at the start of this blog entry said, Trump’s “Executive Order Relaxes Johnson Amendment Enforcement.” Since prophecy cannot be changed by the wicked desires of mankind, that contract had to stay intact, but as I stated last year, it must be rewritten so as to allow the preachers to keep their tax free status as well as preach political sermons. The truth as it was revealed in the prophetic Scripture of our Lord is rock hard fact and no matter how many false shepherds and wolves proclaim otherwise, it will happen!

The prophecy clearly states the ecumenical churches in bed with Rome will have the ability to legislate and pass religious laws against anyone refusing to worship the man of sin in Rome to the point they will lose the ability to buy and sell and then eventually pass laws to have them killed if they refuse to keep his man-made Sabbath holy over and above the never changing and eternal Sabbath of the Creator God. And the Bible clearly says it’s not Sunday.

Again, many scoffed and insisted for years that the 501c3 was not an image of the beast even though the only way to get the 501c3 contract was to join your church with the State so as to make an exact copy of the beast in Rome which is both Vatican city (A STATE) as well as the Roman Catholic CHURCH. (click here to see if your church is a Government agent) But they yelled, screamed, ridiculed and even stomped their feet proclaiming students of prophecy were lying when they said the 501c3 would eventually find the money worshipping preachers becoming viable agents of the State. And then as was revealed and then posted in that video I made in 2004 which was a summary of my image of the beast page on my website I made years prior regarding how all this will go down as Scripture predicts, is in fact proof that it is happening just as the Lord reveals in His written Word.

Now yes, some assume the image was never given life as of yet. But I beg to differ as it was obviously given its life in 2006 when Bush signed that law making all the pastors official government agents (his words not mine) with the ability to lobby religious law. But because of rampant disobedience across the board in all the churches, nary a preacher caught that because the only way to understand bible prophecy is to be obedient. And even after Trump said what he said during his campaign 9 months ago that moved me to make that video back in July of 2016, the truth as it was written in the prophetic Word of God was ignored for the most part by all those pastors. They actually had the ability to lobby law since 2006 as President Bush’s signature confirmed. But, their fear of losing their golden tax exempt carrot blinded their eyes and their fear of losing the money they worship forced them to sit on their hands. But no longer. Trump signed that executive order yesterday and now they have the government they trust above the God they supposedly preach for protecting them on that pulpit.

When the Loud Cry goes forth much louder, it will show all with eyes that see that the Government approved preachers sold out to keep their money growing and are now working hand in hand with the dying god of this world who has been running things from the Vatican for centuries who declares the Ten Commandments have been abolished at the cross, the truth we preach about the Law of God will empty their pews because some of their flock will open their Bibles as did the Bereans of old. That means the hirelings standing at the pulpit will be moved by satan to fabricate a need to pass a law demanding all people attend church on Sunday so as to stop the prophesied increased calamities. Of course that will only be the excuse they use when in fact as prophecy dictates is their way of combatting the truth about the Sabbath of the Creator God that is causing their pews to empty. Their people actually opened their Bibles and found students of prophecy were telling the truth!

The real truth is they pass that law because the love of the money that is in the pockets of those leaving their church is far greater than their love of the Lord or even the people they were ordained to shepherd. That law will cause many to run back into their churches for fear of losing their lives. And so, as prophecy also predicted, the main issue in the last days that divides the disobedient from the obedient or as prophecy puts it, will point out who gets the mark of the beast and who gets the seal of God will come to fulfillment with an exactness only a Creator God can declare.

We are THAT CLOSE NOW!

They literally now have the ability to enforce the mark of the beast and if you are a Christian who is riding the fence on this long prophesied fact, you need to get off that fence and obey the Lord that wrote that Law with His own finger in stone so as to declare it eternally unchangeable. For if you refuse to accept Jesus as Lord and stop offering Him lip service as prophecy proclaims most will today, you will be those very Christians that the prophet Jeremiah declared will shout,  “The harvest is past, the summer is ended, and we are not saved.” -Jeremiah 8:20