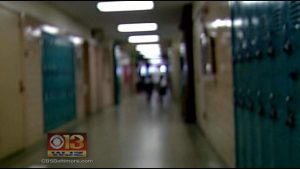 “An elementary school principal in Montgomery County who set up a “smash space” designed to let teachers hack away at a chair with a baseball bat to relieve tension has resigned.” -Source

What on earth was she thinking? I can venture an educated guess like any other person with a few viable brain cells still intact can. And that is that it appears this elementary school principal actually thought it would be a good idea to create a “smash space” because she no doubt feels in her heart a rage to beat the daylights out of children and she knows some of the teachers under her “rule” do so as well. That’s the only thing that makes sense to me as her reason for doing this because why else would you take a baseball bat to a chair in a private room unless you were taking out your rage that was pent up deep within because some innocent little girls and boys got on their nerves in the classroom and because they don’t want to lose their job or be jailed for brutally killing a child; they grab a baseball bat and pretend if only for a moment that the chair is one or all of their students.

Jesus said in the last days that “because iniquity shall abound, the love of many shall wax cold.” (Matthew 24:12) and so it has. That being said; if you’re one in need of a reason to see this statement of Christ confirmed fulfilled in these last days, take a look at my homeschool spurs page when you have a few hours (or days) to kill. It has literally thousands of articles and videos about teachers and principals that are doing all sorts of hateful and demonic things to the children, and that page never seems to stop growing. Multiple times a week I post new articles and videos on it because it’s getting much worse now. And this includes many articles and videos of the teachers actually harming the children. One would think the cameras all over the school would stop them from attacking the children.

The love people used to have for each other and especially for children has all but gone from most hearts today just as Jesus prophesied. And so, when a teacher, who has no love or even the slightest bit of patience in his or her heart is frustrated by a little child, instead of drawing on the inherent love of children deep within the human heart so as to allow the teacher to gather their thoughts and share love with them to try and help them, this principle suggests they just drop what they’re doing, go off to the “smash space,” grab a baseball bat and swing until all the inner rage to beat on a little child is released on the chair. Wow! What a mess the government school system has become! But then, this was expected all along.

Just a thought.. but if I was a principle I would do this a tad differently. If someone in my school set up a room like that I would place a hidden camera in the room to alert me to any teacher that walked into the room. I would then fire that teacher so as to remove one more teacher that has exhibited no self control from being in the presence of precious little children.

The only ray of light I see in all this is that the principle resigned and so, for the moment, just one school out of tens of thousands has one more crazed adult removed from the little children in American schools. It’s as I’ve said for decades and even saw with my own eyes as a student long ago, America schools are NOT safe place for children!