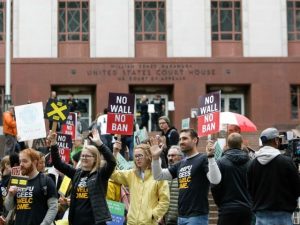 “In his arguments, Neal Katyal stated today that the collection of such data as outlined by the Executive Order 13780 contravenes the Establishment Clause, in the First Amendment of the Constitution of the United States: “Congress shall make no law respecting an establishment of religion… In doing so, Katyal appears to be making the case that honor killings — murder committed in the name of restoring a family’s dignity following discouraged behaviour within fundamentalist homes — is in itself Islamic.” –Source

And that’s how Satan uses Roman politics to assure the most evil things can be protected by the State and this includes the killing of innocent young girls who refuse to do as their crazed Islamic parents demand of them. As prophesied the love of many has waxed so cold that in years past killing one’s daughter would be next to impossible for a father to do. But in today’s world it is so common they need laws like this insane lawyer suggests to protect them. And eventually such laws will exist because it was prophesied and so it will happen. See my new and quickly growing Religious Laws ARE COMING page when you get time.

This twist on the Constitutional foundation is a favored tactic of the powers that be in bed with Rome do on a regular basis. They ignore the fact that the Constitution was written by Christian men who were protecting the very same Christian religion the Vatican persecuted, tortured and killed for 1260 years. And thanks to the prophesied “authority” given them from Satan, the now confirmed Satanic Vatican “legally” killed hundreds of millions of Christians thanks to the Roman Catholic priests, nuns, bishops, cardinal and popes. And so today they hang their hat on the statement but twist it out of whack to claim Islamic honor killings are “religious” in nature so as to pave the way for the soon coming religious laws.

But, let’s allow common sense a say in this shall we?

If because Islam is a so called religion and therefore has the right to kill as they please, since the Satanic church was acknowledged as an authentic “religion” in 2008, why not declare the killings of innocent boys and girls and even consenting devil worshipping adults as legal sacrifices on the altar for Satan? After all, what’s the difference between Satanism and Islamism when it comes to killing people? Truth is, the governments of this world acknowledge all sorts of strange cults as religions and so why not sanction all sorts of insanity?

In any event, everything from doctor assisted suicide to killing innocent babies in and out of the womb (thanks to Jesuit trained W.J. Clinton’s EO on partial birth abortion) are now legalized and so none of what the Muslims are demanding would seem taboo anyway. I mean after all, killing is killing right? And so I am sure the soon to boil over narrative will be toyed with as we get closer to the day they make killing Sabbath keeping Christians legal. As we have seen so often before, they have to start somewhere to garner public opinion. Be it fabricated or not.

And so.. society is pretty bad and getting worse by the day as immoral lawyers and politicians push for the legal “rights” of the insane few that claim their bloodthirsty acts are ‘religious. ” And so one can expect it to get much worse in the coming days. All sorts of crazed rituals will be legalized as long as it’s tagged “religious” with one exception. That being of course all the well sourced biblical truths and the doctrines that declare real Christian truths because this is Satan’s kingDUMB for now.  And since we are not of this world, we cannot expect our truth to be shored up, protected or even legalized by those in power. And who would want that anyway? All they will do is twist it out of whack anyway so as to sanction idiocy like this Hawaiian lawyer suggests. No thanks, I will do my best to keep my citizenship in New Jerusalem intact. Amen?