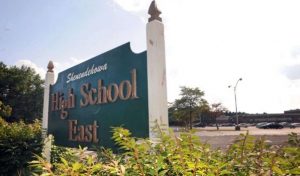 “High schools across America are being pressured to offer time off school, in-school prayer rooms, and special dietary demands by Muslim students observing the Islamic holy month of Ramadan. One campus in Brooklyn has agreed not to serve food at its prom until after sundown while another school in upstate New York is setting up prayer rooms to satisfy the demands of students who observe Ramadan.” –Source

Amazing isn’t it? In a Christian nation we now have Government teachers who have displayed all sorts of hatred towards anything about Jesus Christ who is the pinnacle of peace and love unparalleled throughout the history of mankind so much so it is illegal to even mention His name in American schools. But, if you worship a god that demands you kill Christians in as graphic a manner that pleases the Pope in Rome who actually wrote the book on torture as well as the Quran of Islam, then you are free to demand all sorts of religious rights in the government schools of America who for decades protested to demand a supposed removal of church & state.

The wolves most people call pastors and priests. These so called men of God have CONvinced the masses for years now that “Allah is God” and so when a Muslim declares he is actually a god, they look at helping the Muslim bow to their god as if it’s a moral duty of the Christian and so they open the government school doorways wide to allow for everything from certain Halal meals at lunchtime to actual prayer rooms in government buildings! Some schools have even gone so far as to bring students into Muslim mosques to bow before Allah like the SDA church did, photographed and even published for all to see years ago.

The United States government has been taken over by the Vatican directly after Reagan was shot. Reagan, a professional Hollywood liar aka actor became so fearful he widely opened the Whitehouse doors to the Pope. Since then, everything a Pope speaks on regarding one political issue after another, you will notice that within weeks and sometimes days the puppets in the Oval Office bow to him in worship to implement his plans. Need I remind you of how the Pope demanded all the Roman Catholic Schools teach Islam to the children regardless of the fact their parents are paying high tuition rates to the Vatican so as to teach “Christianity” to their children. Not long after that every Vatican sanctioned preacher and priest in the one world church, and this includes the Seventh Day Adventist church. All the pastors started to push Islam into the churches and schools for the Pope so as to brainwash the children into accepting the Islamic hoards they planned to “migrate” into all nations as peaceful loving people?

As prophesied, there are over 30,000 guillotines on US soil right now. And who do you think is standing in line right now vying for the chance to man the lever on those guillotines for Rome when the real Christians refuse to bow to the man of sin and his mark? The so called peaceful loving Muslims. This is why I have been warning people for years that Shariah Law was soon to become valid in US Courts. That all being said, now do you see why there are anti-Shariah rallies planned for 28 U.S. cities on June 10? Seriously, if it wasn’t prophesied, planned and already in the works to allow for Shariah Law to be part of the American Court System, why are people protesting all across this nation to stop it?

Additional Articles Confirming we are in the Last Days:
VIDEO: Breaking: 5 killed in shooting near Orlando; shooter also dead, sheriff’s office says * Japanese tourists shot dead in Philippines, bodies cut into pieces and thrown into sea * ‘Act of Terror’ as Van Hits Pedestrians in London Bridge, Stabbings, Multiple Injuries * VIDEO: Philippine crisis deepens as air strike on rebels accidentally kills 11 soldiers * VIDEO: London Bridge terror – ‘This is for Allah’ * Snipers Surround Venezuelan State TV Building as Protesters Demand Real News * Nikki Haley Blasts U.N. Human Rights Council Before Visit: ‘A Haven for Dictators’ * Mexican Cartel Executes Man in Broad Daylight near Texas Border * VIDEO: 35 St. Louis-area convenience store owners (mostly Muslim) indicted following federal raids * VIDEO: Remember the “Coin Card” video I made 4 years ago? As expected, there is now a “smart card” that can do as the Lord revealed back then! * Alabama Town Requires Teens to Purchase a Business License ($110.00) to Mow Lawns * Venezuela Devalues Its Currency by 64 Percent, Claims It Signals Economic Recovery * Burundi government orders couples to wed amid drive to ‘moralize society’ * VIDEO: Calif. Mom and Boyfriend Tortured and Killed Her 3-Year-Old Daughter Before Stuffing Body in Freezer * FYI: 9 Reasons To Drink Water That Have Nothing To Do With Being Thirsty * VIDEO: PA Mom and Her Husband Plead Guilty To Gifting Their Daughters To Man (who claimed to be a prophet) Who Allegedly Raped Them * VIDEO: This is how out of control students are in American schools