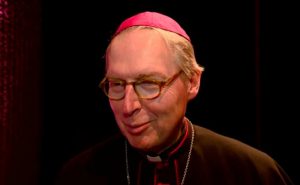 The southern Dutch town of ’s-Hertogenbosch (Den Bosch for short) has been chosen to host the Netherlands’ “Pink Saturday” on June 24. The capital of the historically Catholic province of North-Brabant will welcome LGBT persons from all over the country and beyond with a first-ever event: an ecumenical prayer service for participants to be held in the Catholic cathedral of Saint John the Evangelist in the presence of Bishop Gerard de Korte.

The Roman Catholic bishop recently confirmed that he will give a blessing at the end of the ceremony. Gay rights groups are overjoyed. The local radio, Omroep Brabant, tweeted “Hallelujah” when the news was made public.

“Roze Zaterdag” is the Dutch version of Gay Pride, including a parade with provocative and outré dress and attitudes. Nowadays, cultural, musical and other events officially organized by the host city are thrown in, usually a full week before the day of celebration. It got its name from the protest marchers that were held during Holy Week in 1979 in Limburg, the southernmost province of the Netherlands, against the “anti-homosexual” teachings of Bishop Johannes Gijsen, who was at the time one of the few non-progressive bishops in the country.

“Pink Saturday” was chosen as a counterpoint to the Catholics’ White Thursday and Good Friday. At the time, Bishop Gijsen of Roermond said that practicing homosexuals could not be considered as “full members” of the Church because they could not receive the sacraments while choosing that lifestyle.

Given these beginnings, the Den Bosch “Pink Saturday” will have a bitter taste of revenge, and will certainly appear to be a disavowal of what Bishop Gijsen said in the 1970s.

From the start, the Dutch “Pink Saturday” was a place to push for gay rights. In progressive Netherlands, lesbians, gays, bi- and transsexuals have little left to ask for in 2017, and the event has become more festive, although there are still many gay-rights organizations present and information stands are part of the affair.

The official day always opens with an ecumenical service, but up to now this had never taken place in a Catholic church, let alone a cathedral. It was, perhaps, the last place left to conquer.

The choice of the cathedral of Den Bosch – the fruit of two years of talks with the local clergy and other denominations that are taking part – is a symbolic one. The last time homosexuals made themselves heard in the beautiful, flamboyant Gothic building was during a Sunday Mass in February 2010 when the then-parish priest in the village of Reusel refused to give Holy Communion to an openly homosexual “Carnival Prince.”

At the time, the cathedral’s parish priest, Geertjan van Rossum, made a public statement reminding the faithful that only people who observe the Ten Commandments are admitted to Holy Communion: “Proper living out of sexuality is part of that,” he said, triggering the angry departure of the gay activists.

It is the same Geertjan van Rossum who negotiated the “Pink Saturday” event in the cathedral. He will personally welcome the participants and take the lead role, surrounded by Protestant pastors and “pastoresses,” including an openly gay minister who will all speak during the ceremony. In an interview published on the “Pink Saturday” website, Father van Rossum announced that the bishop himself would take part.

“Ours is a hospitable town where all citizens should be able to live with dignity and we should not make each other’s lives sour, and that is why personally, but also in the name of our Catholic parish, we want to support this initiative,” Father van Rossum said. “We want to have a nice town for all its inhabitants and all its guests. As a Christian and as a believer, I also know there are Christians and believers who belong to the LGBT community and who also want to be involved with the community of the faithful. So as a priest, together with the cathedral parish, we also want to be involved with Pink Saturday, and also with the ecumenical celebration.”

Father van Rossum admits he had some “hesitation” about holding the prayer in the “Sint Jan” that has been at the center of Catholic life in Den Bosch since the Middle Ages, also as a Marian pilgrimage site where a miraculous statue of Our Lady is still venerated today. But in the end, the large Gothic vessel seemed to him the most appropriate for the reception of many participants expected to join the ceremony.

Bishop de Korte has shown his acceptance of the LGBT community. His spokesman, Joos Goes, told Gay.nl that the bishop wants the Catholic Church to be an “open and hospitable institution.”

“The teaching of the Church does not change,” Goes added. But he immediately relativized this reminder, saying: “We understand that people can feel shut out and be disappointed with the Church, but we think that everyone should find a spot within the community of believers. Subjects such as sexual orientation collide with the teaching of the Church, but in practice it’s often not much of a deal. Today, there are already homosexuals who are joyful members of a parish.”

“Pink Saturday” will also have events in the small town of Oss next to Den Bosch. Its parish priest, Father Cor Mennen, well known as a conservative Catholic blogger, published a critical post reminding the faithful of the teaching of the Church as exposed in the Catechism of the Catholic Church.

“This moral standpoint is clear. It does not mean that the Church rejects the homosexual faithful. They can be members of the Church and take part in Church life. The Church does ask her faithful to be prepared in an upright manner to live according to her morals, which come straight from the Bible and natural moral law,” he wrote.

But, he added, “It is against Catholic belief, and therefore not pastoral, morally to approve of homosexual acts or to do as if it were a normal variant of human sexuality.” This is exactly what “most homosexual organizations” are after, he says – which explains their demand for a celebration in the “Sint Jan” cathedral.

“They want to conquer the last bulwark that is holding fast to the scriptural disapproval of homosexual activity and of all acts that go against natural moral law,” he explained.

He goes on to say that friendliness cannot justify a celebration that not only appears to condone the homosexual lifestyle but scandalizes “normal Catholics who want to remain true to the Church’s teaching, not least those homosexuals who make the effort of living chastely in accordance with it.”

He concluded: “It is certainly no coincidence that on June 24th, the Church celebrates the day of the birth of Saint John the Baptist. John was beheaded by King Herod because he reproached him his immoral behavior – Herod was living with his brother’s wife. He who stands up for God’s laws seldom reaps applause.”