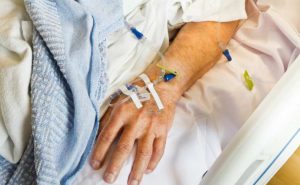 “A bill allowing the starvation and dehydration of dementia and mentally ill patients against their will passed the Oregon Senate 17-13 on June 8. …SB494 would remove safeguards in Oregon law that protect the right of patients to receive food and water as part of basic treatment. It would give healthcare representatives power to potentially coerce doctors into starving patients against their will. …SB494 was introduced after a dispute between the husband of an Alzheimer’s patient and her nursing home. The patient, Nora Harris, had filled out an advance directive saying she didn’t want to be fed intravenously. She began needing helping using utensils. Harris could still eat with her hands and was still expressing a desire to eat. Her husband filed a lawsuit to get her nursing home to stop feeding her.” –Source

Me thinks her so called “advance directive saying she didn’t want to be fed intravenously” may have been forged by her husband as it is painfully clear that even though she is in an advanced state of dementia she still wants to be fed. And because she won’t allow them to murder her by starvation, her husband is now seeking laws to allow her to be murdered. And in today’s world where any woman can walk into an abortion clinic can legally murder her baby to avoid stretch marks, or any coherent patient dying of a so called incurable disease can pay their doctor to legally murder them, what’s to stop this man from seeking a way to murder his wife so he can either gain her insurance money, prevent her insurance payoff from dwindling due to it being used to feed her or on the better toss of the coin he simply can’t deal to watch her drift away mentally.

Whatever the case may be, none of it can be seen as a proper or moral reason to murder someone no matter how many Senators agree to do so. Worse yet, the article goes on to say this man was actually able to convince his very own children to join him in his immoral reasoning to murder their own mother and so one can see the mindset of the husband and his unloving family are similar to that of the Oregon Senate.

Now yes, they can argue in a courtroom that the mother, who her AMA doctors can declare has lost her memory due to her diagnosed condition, cannot recall her so called “advance directive” demanding she not be fed intravenously. But here’s the truth in this open eyed reality. She is not being fed intravenously. She’s using a spoon. Better yet, even if she doesn’t remember the “advance directive,” she actually wants to eat. The fact she’s swallowing the food confirms this. And that fact alone proves she either changed her mind, she never penned the “advance directive,” or she simply doesn’t want to die of starvation. But her husband and now her very own children want her to starve to death so much so they are suing the nursing home that’s feeding her.

What we see happening here is just one more boil on the back side of the dying god of this world that’s running things behind the scenes. As prophesied long ago, very few now love their spouse, children, parents, friends neighbors or anyone else for that matter because as Jesus said in Matthew 24:12, “because iniquity shall abound, the love of many shall wax cold.”

The sinfulness of mankind and all that it spews is the driving force behind all this insanity. Long gone are the days when a husband weeps at the bedside of his dying wife. Long gone are the days wherein most mothers, siblings or parents spoon feed their loved one as they live out their final days on this sin sick world. Today, most prefer to just pull the plug to their loved one’s life support system like they’re starting a mower! Money is their god and any means by which to allow it to stay within their coffers will be their guiding “angel of life” to even more decadence. After they kill of those they should have protected, the heartless hoards party on as if their loved one never lived at all. Death has become so normal today that next to no one seems shocked by any of this. A man and his children are actually looking to get laws passed that will allow them to murder his wife and mother of his children simply because she can’t remember what he looks like? Seriously?! What is this world coming to? …  AN END!