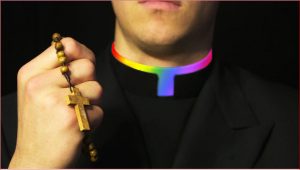 ROME—It all started with the usual complaints from disgruntled neighbors: funny smells, slamming doors, loud music, the sound of squeaky beds and laughter late into the night. In almost any other situation anywhere in the world, the angry neighbors would have confronted the noisy tenant, maybe left a mean note on the door or complained to the landlord and the matter would be settled.

But this particular dispute occurred in one of the most prestigious addresses in Rome, the so-called Ex Sant’Uffizio Palace, in the very apartment owned by the Congregation for the Doctrine of the Faith where Joseph Ratzinger lived for decades before becoming Pope Benedict XVI. The palatial ochre-colored building is home to dozens of high-ranking cardinals who live within walking distance of their jobs at the Roman Curia in Vatican City next door.

The fed-up neighbors were simply sick of what they described as a “steady stream of young men” who frequented Ratzinger’s former apartment, which had been given to Monsignor Luigi Capozzi, the secretary for Cardinal Francesco Coccopalmerio, who heads the Vatican’s Pontifical Council for Legislative Texts, which busies itself with deciphering and clarifying various points of canon law. So they called the cops, in this case the Vatican’s elite Swiss Guard gendarmerie unit, when the noise and movida nightlife just got to be too much.

Calls to the Swiss Guard turned up neither confirmations nor denials, but Capozzi is no longer at his job, according to the switchboard operator at his boss’ office.

Capozzi could be defrocked for his indiscretion, but that seems unlikely even though he would have clearly broken the vow of celibacy. His boss Cardinal Coccopalmerio has already replaced him and will not face any disciplinary measures for hiring such a promiscuous clerk. The cardinal is in no way implicated in the scandal, but he is expected to resign from his position next year when he turns 80, as is the custom. His office did not return calls for this story.

This latest salacious headline, which has become all-too-common when it comes to priests behaving badly, is said to have angered Pope Francis, who considers Coccopalmerio a close aid.

It comes on the heels of last week’s news that the pope’s finance czar, Cardinal George Pell, is facing criminal sex abuse charges for alleged crimes during his time as a priest in Australia.