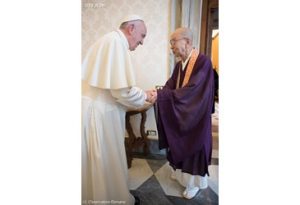 (Vatican Radio)  Pope Francis has sent a letter to the 30th Prayer Meeting on Mount Hiei in Kyoto, Japan, inviting all religions to “pray and work together for peace”.

“It is my pleasure to send my cordial greetings to you and to the distinguished representatives of the different religious traditions,” he wrote.

The Pope’s letter was delivered and read to participants by Cardinal John Tong Hon, Bishop-emeritus of Hong Kong.

It was addressed to Venerable Koei Morikawa, the Supreme Priest of the Tendai Buddhist Denomination, with whom Pope Francis met privately in the Vatican on September 16, 2016.

“This annual religious summit contributes in a special way to the building up of that spirit of dialogue and friendship which allows the followers of the world’s religions to work together to open new paths for peace in our human family.”

Pope Francis also said prayer “inspires and sustains our efforts for peace, because it helps to deepen our reciprocal respect for each other as persons, strengthens the bonds of love between us, and spurs us to make decisive efforts towards promoting just relations and fraternal solidarity.”

The annual prayer meeting closes on 6 August in commemoration of the atomic bomb dropped on Hiroshima in 1945.