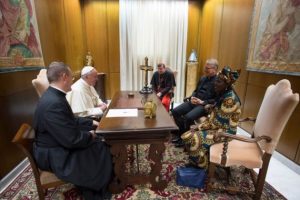 Pope Francis and the leadership of the World Council of Churches have met in the Vatican and discussed how Christian unity is vital in bringing a true sense of justice to issues the world is facing today.

The Aug. 24 meeting attended by WCC moderator Dr. Agnes Abuom and WCC general secretary Rev. Olav Fykse Tveit also focused on how to deepen relations in the one ecumenical movement, the WCC reported.

Tveit, who is a Norwegian Lutheran said in remarks, “We are very grateful for the very constructive and fruitful meeting with Pope Francis today.

“We are living in a time when the purpose and the objectives of the ecumenical movement are highly relevant. Based on these realities, there is a need for a new search for unity.”

He added: “There is a willingness in the WCC constituencies and beyond, in the Roman Catholic Church, to seek a united witness and a common service for those who need us to unite our agendas and resources for those who need our attention the most.”

The WCC leader said that “we have a common view of the role of the ecumenical movement and the needs of the churches in a divided and fragile world.”

Dr. Abuom, a Kenyan Anglican, underlined: “The unity of the church and the unity of humankind are interconnected.”

She said that ecumenical endeavors cannot succeed without a deep understanding of what it means to live together “in the body of Christ, in the love of Christ. We are working, walking and praying together.”

She also reflected that “The many expressions of polarization, greater gaps between rich and poor, extremism and violence, worries about the future of the planet Earth and withdrawal of accountability for our common home and future create a constant call upon what we stand for.”

Along with emphasizing the important role of faith leaders in seeking solutions to conflicts in the world, Abuom and Tveit also spoke about issues of climate change and economic justice as major concerns in the pilgrimage of justice and peace.

“The future of humanity is threatened; the poorest among us are already feeling the worst consequences of them. We encourage you and the Roman Catholic Church to be with us in mobilizing a real change of mind, heart and priorities,” Tveit said.

The meeting with Pope Francis included common prayer for unity, peace and reconciliation. The audience concluded with a collective wish to explore opportunities to meet in 2018.

The visit to Rome was hosted by the Pontifical Council for Promoting Christian Unity of the Roman Catholic Church. A special meeting took place with Cardinal Kurt Koch on the joint working group with the Catholic Church and the WCC.

The WCC delegation met with Dr Flaminia Giovanelli, under-secretary at the Pontifical Council for Justice and Peace and the main focus of the discussion was on climate justice and COP23 in Bonn, nuclear weapons, an upcoming consultation on migration and xenophobia in December, and peacebuilding initiatives.

On Aug. 23 Abuom and Tveit also visited the Community of Sant’Egidio.

Tveit said: “We met with four young men in Rome who have come to Italy as refugees through a dangerous journey at the Mediterranean Sea. Two Christians, two Muslims.”

He added, “Through participation in the programs of Sant’ Egidio they have learnt Italian, been involved in voluntary work, and now have jobs.”

Tveit expressed his concern that “many in Europe today see people like them as four problems – even risks. They are four human beings. Four lovely, strong young men who contribute to Europe doing work needed.”

The WCC is a grouping of mainly Anglican, Orthodox and Protestant churches made up of some 560 million Christians with which the Catholic Church cooperates on many issues, without belonging to it as a member.