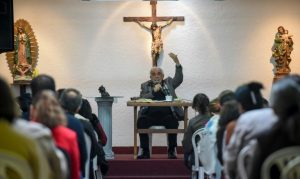 Though millions may turn out to wave at Pope Francis when his popemobile rolls through Colombia’s streets this week, one group of people will not be smiling — or even watching.

They go to mass and their homes are filled with devotional figurines, but for some here, this pope is just not Catholic enough.

“This visit is by someone ‘non grata’, as diplomats say… He is a false pope, a false prophet of God,” says the academic Jose Galat, the movement’s most prominent member.

“Instead of bringing blessings for the country, we expect he will bring curses and evils.”

As the first ever Latin American pope, the 80-year-old Argentine Francis is widely popular in the continent.

But Galat and other ultra-conservative Catholics consider him “illegitimate.”

For them, his stance on questions such as homosexuality and hell is unbiblical and too liberal.

They admit they are a minority in this mostly Catholic country of 48 million people.

But they are politically influential — Galat himself is a former presidential hopeful.

And they have a powerful mouthpiece in the international cable television channel Teleamiga.

Bald-headed and with thick spectacles, Galat, 89, has an audience of 400,000 for his 90 minute-long weekly program on the channel.

Galat and his followers say the choice of Francis as pope was the result of a reformist conspiracy.

Branding Francis a populist and a Marxist, they say there are subliminal messages and symbols in his clothing and accessories.

They say these identify him as a freemason and member of the Illuminati, a supposedly secret society.

The Vatican denies the claims.

The Colombian Episcopal Conference issued a statement in July accusing Galat of “seriously hurting the Church communion” and encouraging a schism.

Another group within the anti-Francis movement is the Bethlehem Corporation Fraternal House, formed 24 years ago.

Dozens of worshippers of all ages gather at its headquarters in a house in a residential district of Bogota.

On the walls hang photographs of the Virgin Mary and former popes John Paul II and Paul VI.

On the bookshelves stand titles such as “The Kingdom of the Anti-Christ.”

For members of this group, the true pope is Francis’s predecessor Benedict XVI, the conservative who voluntarily retired in 2013.

The president of the corporation, Rafael Arango, addresses sympathizers gathered at the house.

Francis enjoys “great popularity because he says what people want to hear: that sin is not sin, that anyone can receive communion,” Arango says.

A lawyer and political scientist, Arango, 78, says he used to follow Francis’s teachings.

But he became disillusioned by what he saw as Francis’s departure from Christian dogma.

“A pope cannot go beyond the word of God, nor alter nor reform it,” he says.

“The only eternal and unmoveable thing is the Bible.”

Ultra-conservatives accuse Francis of denying the existence of hell and say he is too indulgent of homosexuality and women’s place in the church.

“He is a populist of faith. He wants to please everyone,” says Galat.

They say they will ignore his masses and meetings with local people during his visit to Colombia from September 6 to 10.

During his visit the pope will meet with victims of Colombia’s half-century civil conflict.

He has supported Colombia’s the peace process, which itself has generated divisions.

The government last year signed an accord with the FARC leftist rebel group which has led to the force disarming despite resistance from conservative critics.

The pope will also visit impoverished districts of the country.

“He thinks it is more important to calm people’s physical hunger than to bring to people the word of God,” says Guillermo Rodriguez, 36, a visitor to the Bethlehem Corporation Fraternal House.

He says he will not attend any of Francis’s gatherings this week.

“God protect me from going to one of his events,” he says.

“I cannot go against my conscience and against the Bible. I would be risking my soul.”