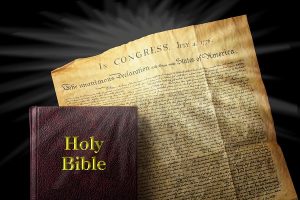 Ever since I created the image of the beast page on this website wherein I show how the 501c3 contract of the American Government drafted by Lyndon Johnson back in 1954 was a prophesied fulfillment wherein every church that signed unto it becomes a duplicate or “image” of the Roman Catholic Vatican; because we all know the only legal way to have a 501c3 is to Incorporate or join your church or ministry with the State; all the preachers and pastors with the 501c3 have said I was crazy for making such a claim.

For decades they have said I was wrong because the 501c3 contract only grants them tax free status wherein they have no political voice whatsoever. But then March 7 2006 came along wherein President George W. Bush signed it into law that all churches with the 501c3 are now legally considered government agents of the State with the ability to lobby law. Again the scoffers on the pulpit said, no it’s still not a prophesied fulfillment of the image because they feared the IRS that wouldn’t allow them to speak politically even though the President drafted the Bill in that manner. And then As Donald Trump was campaigning and promising to repeal the Johnson amendment in his campaign speeches the blinded pastors under the 501c3 again said, no that is still not prophetic fulfillment because Trump is just making campaign promises like any other politician just to gain office. And even if he gained office the IRS still chains the pulpit down tight. Then May 04, 2017 came along wherein now President Trump officially removed the IRS power over the churches wherein they can now legally stand on pulpits speaking politically to not only influence elections but offer their voice in the lobbying of any law they agreed with. Again they claimed the image of the beast prophecy cannot be the 501c3 because the divided Senate will never be able to reach the amount of votes they need to make such a sweeping changes as this to where they would repeal the Johnson Amendment giving them power that emulates the church & state power of Rome.

With all that said, and mind you, at every single turn we see how the blind pastors under the 501c3 contract have been completely wrong at each and every signpost along the path of the long prophesied 501c3 contract, notice what just happened this morning! They now have all the votes they need to go forward.

And what’s in this tax plan that’s so prophetically important? Check this out! Also see this and then see this just to mention a few. After reading that and seeing how the Johnson Amendment is in fact part of the mix, think about all that for a moment!

All the churches ignored the prophesied implications of all this. And this includes all the SDA pastors and preachers who supposedly understand and even teach prophecy. Once this is set in stone, and it will be as Christian prophecy never fails, the churches with the most power will be able to endorse the candidate of their choice above the smaller churches which means the exact same thing when it comes to lobbying the long prophesied Sunday law. And thanks to the ecumenical charge of Rome wherein every church is now in bed with the Pope, and yes this includes the SDA church from the leadership down to the pastors on the GC payroll, what do you think will happen in the coming days? Perhaps a statement or two from Rome itself will shed light on this since most prefer to believe mankind over the Creator who penned the prophecies in the first place.