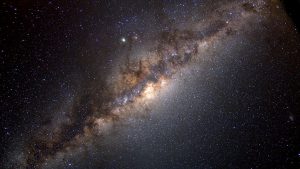 The video is titled, “There are 400,000 galaxies in this animation, these are their actual, real positions.” And as I recall this video only shows a very small section of the Universe wherein at first was thought to be nothing but a dark region of space with no stars at all. As we know now thanks to modern technology, there are billions of galaxies out there in the expanse we can see with the tools we have now; and no doubt trillions more in the areas we can’t reach with the telescopes we have today.

But as you watch this video, think about this. Soon, those of us that walk in obedience with the Lord that created all that is seen and unseen will be found worthy to gain eternal life in our Fathers Kingdom. While there we will be able to visit each and every one of the planets in each of the galaxies we see here and more so as to speak with every soul that lives on each and every planet so as to glorify the Lord we have known all our Christian lives while living on the frontlines of a holy war between good and evil proclaiming His truth on a sin sick world filled mostly with those that don’t even believe in the Creator that made them and everything they see.

This video depicts, using computer aided accuracy to keep it real and in perspective, a very small section of the Universe that we the obedient bride of Christshall visit after Jesus returns to take us Home so as to reign with Christ. And yes, we will continue the work started here that is “to make all men see what is the fellowship of the mystery, which from the beginning of the world hath been hid in God, who created all things by Jesus Christ: -Ephesians 3:9. “For by him were all things created, that are in heaven, and that are in earth, visible and invisible, whether they be thrones, or dominions, or principalities, or powers: all things were created by him, and for him:  And he is before all things, and by him all things consist.” -Colossians 1:16-17. And this same “God, who at sundry times and in divers manners spake in time past unto the fathers by the prophets,  Hath in these last days spoken unto us by his Son, whom he hath appointed heir of all things, by whom also he made the worlds;” -Hebrews 1:1-2.

That’s right, His Word even speaks of those other worlds He created besides the one we stand on. In fact, see my Heaven page on my main website to see many passages in the Bible that speak of what we will be doing in Heaven that most preachers today never talk about so as to not offend those that embrace everything from evolution to homosexuality. Heaven will be an eternal joy unto those that love the Lord Jesus Christ. In fact, according to Isaiah 65:22, “for as the  days of a tree are the days of my people, and mine elect shall long enjoy the work of their hands.”

So.. as His obedient bride, even now we can look up and “see, and know, and consider, and understand together, that the hand of the LORD hath done this, and the Holy One of Israel hath created it.” – Isaiah 41:20. And when we look upon this very small section of the Universe through an even smaller man-made telescope wherein a mere 400,000 galaxies come into view, we can know that there are literally trillions upon trillions of precious souls to visit and share the Father’s love with throughout all eternity. Now do you see why it is declared in His Word that we will never be bored in eternity? It will take an eternity just to meet all those that already know and love He who we declare on Earth to be Lord, King, and Creator.