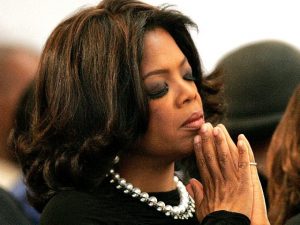 “Entertainment mogul Oprah Winfrey told People in an interview published this week that the one thing that can get her to run for the presidency is if God provided her with a “clear” sign that she should do it.” –Source

Notice how they make it a point to show Oprah in prayer in the article. Have you seen the videos of Oprah denying Jesus Christ is Lord so as to generate “another Jesus” as the prophecy predicts many will do today? There are so many now all I can do is give you a link wherein they are listed on YouTube. And so it is obvious the god she prays to is not the Jesus of the Bible. Still, if she decides to run she will claim that the God of Heaven told her to run.

Now I doubt seriously that she will run as she knows nothing about politics or how to run a nation. But, in today’s world wherein we have seen puppets in the White House the last few decades, anything can happen. But I will say that the timing of her announcement is perfect as anyone that saw my last video can see. The talk of religion in politics is ramping up so as to normalize political religiosity in the minds of the American people because as prophesied the need for religious laws is a must if they are ever going to be able to enforce the mark of the beast. Which as I illustrated in my last video is in fact a religious law. And so it’s obvious as to why Oprah made this announcement when she did.

And think about this as well. If who she calls god doesn’t speak to her telling her to run for office, then all she did by her announcement was to bow to her dying god so as to use her popularity to keep the religious banter active in the media. But if she decides to run; she will be able to escalate her so called religion in politics because the common sense question to ask is, what do you think will be the very first question every single News reporter will ask her on day one of her political campaign? You guessed it, they will ask her what sign God gave her that made her know it was time for her to run for president; and so right from jump street her campaign will be drenched in religiosity because she will be known as the candidate “God” officially endorsed. And even though she isn’t a Christian as per accurate biblical definition, like Obama who we have a mountain of evidence confirming he was not a Christian as he claimed, she too will claim to be a Christian to garner the votes in this supposed Christian nation. And then it will be far easier for her to sell the idea for religious law. Especially when main stream prosperity preachers honor her before the masses in their televised church services.

And why in these last days wherein the sins of mankind declare it to be an evil and adulterous generation is someone as popular as Oprah Winfrey asking God for a sign? It’s because of what Jesus said in Matthew 12:39, which was that “An evil and adulterous generation seeketh after a sign…” And so it was expected that someone like Oprah who denies Jesus Christ as Lord and has promoted a new-age movement that embraces Satanic theology would be puffed up by the powers that be in this sin sick world. The fact that she believes that God is jealous of her proves, Satan has a tight grip on this woman and so, please pray for her.