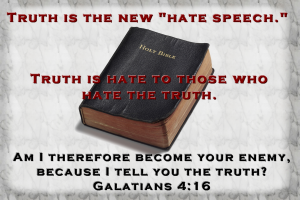 Some of you may already know this, but a few weeks ago YouTube deleted a video I made claiming it was hate speech. I was trying to dispute and hopefully get the video released, but there’s no fixing it now as YouTube refuses to answer any emails. And so I am just going to put it out there. As most of you know that subscribe to my YouTube channel; Google has been censoring me for years, and now that they own YouTube, they have deleted a few of my videos, placed copyright strikes on some wherein no copyright infringement happened, and they have even emailed me to alert me certain videos would not be allowed to be viewed in Israel, Germany and other nations due to their claims the content was politically troubling for those regions. They even tagged a sermon I did years ago wherein I explain how the powers that be fear our God. They actually showed their abject fear by placing a content warning on it stating the sermon was inappropriate. But every Christian with eyes that see can tell I only share Biblical truths as well as prophetic facts in all my sermons and videos. How on earth can a Bible sermon be deemed inappropriate is beyond me; but then these are the last days where this is to be expected.

A few weeks ago I got an email from YouTube saying they are deleting my video titled “US Muslims want Sharia Law that demands Christians MUST DIE!” wherein I shared reputable news articles, historic records, and Bible prophecies proving how the Pope and Islam are working hand in hand in the USA to bring about Shariah law that will cause the deaths of Christians. They not only claimed what I shared was HATE SPEECH even though all of it was 100% backed by Scripture, historic record and current news reports, they deleted the video and put a permanent statment online for those that click the link claiming the video was hate speech so as to both prevent the Pope and Islam from being outed as well as make some less educated seekers choose to unsubscribe to my channel. If interested, you can view the video on my online archive at http://www.john1429.org/Shariah_in_USA.html. You can also click here for all the prophetic and historic facts linked out in detail.

This video was deleted for a reason! And once you watch it you will realize they fear such truth getting out easily. In fact, when I asked YouTube to explain where the hate was in the video, and I asked them once in their dispute form and once more in another dispute form wherein I was able to remove a copyright strike on another video. I got no response whatsoever from either form! They won’t even allow me to dispute it because they know if they try they will open a door they can’t close! And so, as students of prophecy have been saying for years, the Bible we now use is considered hate speech right here in America by the powers that be.

That all being said, I am asking all of you to pray as well as share with me any server and or software ideas on building a video server wherein all the SDR brethren can upload their videos to. We need to have a safe place where the Bible will not be tagged hate speech and the freedom to proclaim present truth will continue. We will not be using public servers as my experience with them is not conducive to a free speech environment either. With the Lord’s help we in the SDR church will set up our own servers and do all we can to continue proclaiming present truth far and wide. So again, please pray and share your ideas in the comments section below. And, just so you know, the videos and studies will become portable when the time comes that we are totally removed from the Internet so as to further continue the work our God has called us to do.