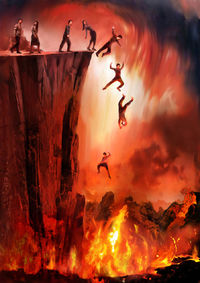 The best way for Satan to get people to trust him working behind the scenes is for him to act as if he is a religious leader. That’s how he’s been able to get billions into graves awaiting the day he and all his followers will burn to ashes when the long prophesied Hellfire ignites. And so, what does the Bible say about Hellfire? Do people live for eternity in the flames and do Satanists really rule in Hell with Satan for eternity? Or was it all fabricated by Rome?

When you get time, check out my “Truth about Hellfire” page. I share a lot of Bible verses most Christians never knew even existed because as declared by the prophet Amos and Isaiah, most people prefer to listen to the many false prophets they call pastors instead of reading their own Bibles. I will not share all of them here as that would make for a huge blog entry; but I will share a few that will hopefully open the eyes of many as well as move some into checking out the dozens of other verses their pastors never told them about. Notice also how basic and to the point these verses are. It’s actually quite easy to expose the lies. Problem is, no one can see the lie unless the truth is declared first. And so, check this out.

The Bible says in Romans 6:23 that, “For the wages of sin is death; but the gift of God is eternal life through Jesus Christ our Lord.” And so why do all the Catholic priests and Protestant preachers who now wonder after the beast declare people are alive in Hellfire? It’s because once you obey Satan, whether you realize it or not, you have no choice but to preach as he commands. And no, I am not saying all the priests and preachers are card carrying Satanists. They are simply uneducated in Biblical truth and rightly so as most of them were taught in the seminaries that are run by Rome. And so like the serpent in the Garden of Eden who said to Eve “Ye shall not surely die” (Genesis 3:4) those that wonder after the beast system Satan built in Rome just as prophecy said he would, they will simply echo Satan’s 6000 year old lie that people don’t die when they sin against God.

And when speaking of the fate of those that refuse to obey the Lord, the apostle Paul said in 2 Thessalonians 1:8,9 that they will be cast “In flaming fire taking vengeance on them that know not God, and that obey not the gospel of our Lord Jesus Christ: Who shall be punished with everlasting destruction from the presence of the Lord, and from the glory of his power;” Everlasting destruction means just that. It has an end. Once destroyed it stays destroyed for eternity. Once the person burns up; and this includes the soul, they turn to ashes.

Notice what Jesus said to the obedient that may be martyred throughout time. He said in Matthew 10:28 that we should “fear not them which kill the body, but are not able to kill the soul: but rather fear him which is able to destroy both soul and body in hell.” Everlasting destruction means both body and soul will turn to ashes. How do I know that? Notice what the prophet Malachi said about what the obedient Christians will do after the wicked are burned up on that day. He said in Malachi 4:3, “And ye shall tread down the wicked; for they shall be ashes under the soles of your feet in the day that I shall do this, saith the LORD of hosts.”

Or notice what the Lord said about the wicked through His prophet in Isaiah 47:14 which was,”Behold, they shall be as stubble; the fire shall burn them; they shall not deliver themselves from the power of the flame…” How I ask can ashes or stubble be considered living beings when even their souls are burned up by the Lord? And then why would Peter use Sodom and Gomorrah as an example for the end result of those headed for Hellfire when he said what he did in 2Peter2:6 which was about “turning the cities of Sodom and Gomorrha into ashes condemned [them] with an overthrow, making [them] an ensample unto those that after should live ungodly;”

And so again, I am not going to share all the verses here; like the ones about the worm not dying, the fire that is not quenched or even the fire that burns from the midst of the people in Hellfire as Ezekiel described it because I share those verses and more on that page I made all about Hellfire years ago. I pray you find time to check it out if in fact you believe people are going to be alive in Hellfire.