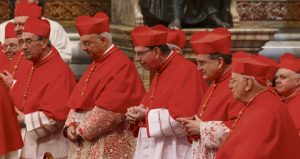 As we all know the Vatican hierarchy is made up of many ranks just as was the original military ranks of Pagan Rome. And one of the ranks that just about everyone alive knows about is in fact the office of Cardinal which is second only to the Pope. A vice president of the Pope if you will. In fact, it was stated back in May of 2015 that…

“Many things changed on March 13, 2013, the day Cardinal Jorge Mario Bergoglio of Argentina was elected as Pope Francis. Perhaps nothing mutated as dramatically as the career of Honduran Cardinal Oscar Rodríguez Maradiaga, a leading progressive voice in Catholicism. …Today he comes off as virtually a “vice-pope,” the coordinator of Francis’ all-important council of cardinal advisors and his most visible and outspoken interpreter.” –Source

And yes, this vice-pope is just as evil as his Pope. Check this out when you get time.

And so it is obvious that to call a man Cardinal in the hierarchy of Rome is to also declare that man vice-Pope. And since there are literally millions of quotes in all sorts of publications confirming this as fact that cardinals are second only to the Pope; I will quote from one publication that the Vatican actually uses to teach its flock all about their hierarchy. That book is something every Catholic is familiar with. It’s their Catechism, and this is what it says about Cardinals.

Even the description of the office of Cardinal is clearly the same as the office of vice-president when used in the ecclesiastical sense. And so with that said, does the Seventh Day Adventist church also embrace the office of the Cardinal since we already know they have embraced its Pagan hierarchy structure as I shared in a previous video wherein they place the SDA President above Jesus in the church in the exact same way the Pope stands in the Roman Church, and since we already know the SDA leadership has declared in writing that they already see some of their women workers in the same exact way as the Popes does when it comes to his nuns as I shared in this video; could it be they also have the same Roman Catholic office of the Cardinal in the SDA church? We already know there are more than a few vice-presidents in the General Conference divisions, does the leadership of the SDA church goes so far as to describe them as Roman Catholic Cardinals?

Notice what a past president of the General Conference Neil C. Wilson who is the father of the current SDA president stated back in 1985.

Think about what he just said here in regards to all division presidents who are vice presidents of the General Conference president. Since he just described these vice presidents in a way that likens them unto the same office of the Roman Catholic Cardinal, that makes the General Conference president the one supreme leader or Pope of the entire Seventh-day Adventist Church in the same way as the Pope is declared supreme leader of the Vatican and the Roman Catholic church. And since we know the SDA General Conference or even the vice presidents of same never demanded Neil C. Wilson recant his statement about Cardinals in the SDA church, and the fact the SDA church already has a Vatican in Maryland wherein the Pagan hierarchy is confirmed in reality, this means the SDA people, who for the most part are unaware, these poor souls trapped in apostasy officially have a Pope named Ted Wilson as we speak, who is in fact the son of Neil C. Wilson that declared his office to be the same as that of the Roman Pope long before his son took on that very same office.

“I promise and swear that I will always be not only your helper and supporter, but your chief and leader.” -Pope Pius VII, in Diu Satis (On A Return to Gospel Principles), Encyclical promulgated on May 15, 1800, #10.

“Faith has been preserved with the Roman Pontiff, there is one flock of the Church of Christ under one supreme shepherd.” -Pope Pius XII, Ad Apostolorum Principis (On Communism And The Church In China), Encyclical Promulgated on June 29, 1958, #46.

“The supreme pontiffs….the supreme pastors and teachers of the Church of God, the guardians and interpreters of the patrimony of the faith…” -Pope Paul VI, in Sacerdotalis Caelibatus (The Celibacy of the Priest), Encyclical promulgated on June 24, 1967, #36.

“As captain I spur you not to close yourselves on the defence: don’t lock yourselves into the defensive, but go on the offense, play together for our team, which is that of the Gospel.”
–Address of Pope Francis to members of the sports associations for the 70th anniversary of the foundation of the CSI (Italian Sports Center) Saint Peter’s Square Saturday, 7 June 2014

“He’s the spiritual leader of the community of faith….He’s shepherd, guardian, guide and captain.” -Walter Scragg, President of the South Pacific Division of the Seventh-day Adventist Church, in the Record, June 23, 1990, p 4.

Additional Articles Confirming we are in the Last Days:
Evangelical groups hop on LGBTQ bandwagon * WHAT?! Pope Francis Warns: Haters Should Not Go to Church * In just HALF of Catholic Diocese OVER 1000 priests names as child molesters! * Stolen secrets of 9/11 attacks ‘held for ransom’ * VIDEO: 10 Dark Secrets Brands Don’t Want You To Know * WHAT?! First Muslim Women Elected to Congress Took Oath of Office with Quran * FYI: Border Patrol can now collect, keep social-media data * VIDEO: GRAPHIC: Newly sworn in (on Quran!) Devout Muslim uses foul language towards her own son and against US President * Palestinian-American Tortured, Sentenced to Life in Prison by PA for Selling Land to Jews * 5 facts about the religious makeup of the 116th Congress